Many people visiting El Alamein are simply passing through and there are many top attractions nearby, such as the glorious city of Alexandria. Enjoying a stunning coastal setting and offering plenty of beachfront attractions, Alexandria is especially close to El Alamein and a popular excursion.

Also within reach of El Alamein are the world-famous monuments and historical attractions at Cairo, which include the Pyramids of Giza and other awe-inspiring ancient structures from the past. Also nearby, the attractions of Damanhur, Marsa Matruh and Sidi Abdel Rahman are all worth a look. 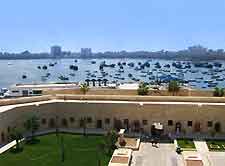 The city of Alexandria enjoys a glorious coastal setting and is just a short distance from El Alamein, being located directly east. One of Egypt's most historic cities, Alexandria is a popular destination for those visiting the Commonwealth War Cemetery and War Memorials of El Alamein and features an ancient acropolis, a 15th-century citadel, a Roman amphitheatre, open-air street markets, the Graeco-Roman Museum and a surprisingly large number of modern shopping malls. 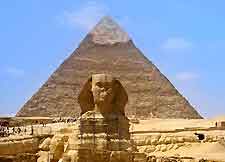 An outstanding city lying south-east of El Alamein, Cairo is overflowing with must-see attractions and is most famous for its pyramids. A busy and modern city worth exploring, Cairo is close to the small town of Giza, where you will find many sacred landmarks, such as the Great Pyramids of Giza and also the Great Sphinx. Also worth visiting are the attractions within Cairo's Egyptian Museum, where more than 120,000 relics and treasures are housed.

Sidi Abdel Rahman stands approximately 23 km / 14 miles west of El Alamein and is home to a selection of stunning beaches, next to the sparkling and rather enticing waters of the Mediterranean. An unspoilt and undeveloped resort which is just begging for more attention, the attractions of Sidi Abdel Rahman are linked to both El Alamein and nearby Marsa Matruh by regular service taxis. 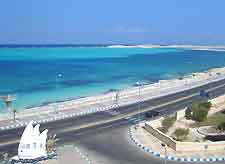 West of both El Alamein and Sidi Abdel Rahman, the beautiful waterfront town of Marsa Matruh is worth searching out and is centred around a bay of crystal-clear blue water. With a number of stunning white, sandy beaches and several waterfront attractions, Marsa Matruh becomes extremely busy during the hot summer months and rather empty outside of this period, when hotel rates plummet. 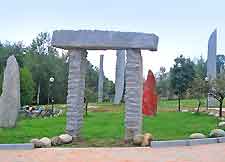 Located directly east of El Alamein and to the south-east of Alexandria, Damanhur is a large town, with a population approaching 200,000 people. Damanhur is a particularly historic spot and known for its Roman heritage, as well as cotton ginning plants and colourful markets. Although Damanhur does not contain any notable tourist attractions as such, it is a fairly undeveloped town and untouched by tourism, making it a good place to visit if you are looking for a taste of traditional Egyptian life.