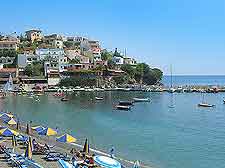 Steeped in quite a remarkable history and once the home of the mythical Minotaur, the island of Crete is enormous and in many ways resembles nothing short of a small country. The biggest of all the islands in Greece, Crete is flooded with interesting sites, ranging from Venetian castles, Byzantine monasteries, and of course, the remains of some enormous palaces from Minoan times.

Crete is also known for its natural beauty, with its landscape comprising mountain ranges, caves, gorges and a rather beautiful coastline, lined with plenty of tempting sandy beaches. The Cretan ports of both Hania and Rethymno remain two exceptionally beautiful Greek cities, although Iraklio (Heraklion) is the capital of Crete and central to tourism, being home to the Tourist Information Centre of the EOT (Greek National Tourism Organisation), which resides on the Xanthoudidou, close to the Archaeological Museum of Iraklio. 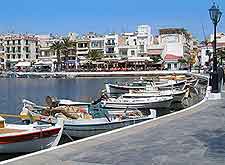 Away from the archaeology and ancient sites of the island are some rather special beaches, which are usually ideal for sunbathing and swimming, offering a variety of water sports. Many of the beaches become quite busy during the summer months, the peak time for Crete holidays, whilst others stay almost completely deserted, offering seclusion and little in the way of amenities. There are some very good beaches scattered around Hania and central Crete, although on the southwesterly coast, it is Preveli Beach that draws the crowds and is one of the island's most photographed beaches, being home to a rather spectacular rock formation in the sea itself. More information about Crete Beaches. 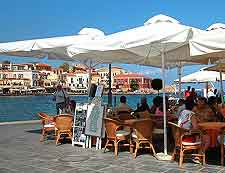 There is also much to enjoy around the coastline and beaches of Crete, with water sports such as snorkelling and scuba diving ranking very highly. Yachting is also extremely popular around Crete, while the interior of the island offers a host of scenic mountain trails and activities, with the pathways through the Samaria Gorge affording some truly spectacular panoramas. For children, the Creteaquarium is always very appealing, as is the zoo at the public gardens of Hania. In general, the northern coastline tends to be busier and more touristy that the southern coast, and if you are looking to sightsee whilst you sunbathe, then come to the beach at Matala, where a large number of man-made caves have been carved into the cliffs. More information about Crete Tourist Attractions. 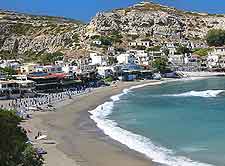 Many of the most impressive archeological ruins on Crete are Minoan and at the very top of everyone's list of things to see should be the remains of the Palace of Knossos, which are on the very outskirts of Iraklio. Another major Minoan palace is located at Phaestos (Phaistos), with other important ancient sites being located at Gournia, Kamilari, Malia and Zakros. Within Hania, the immense fortifications add tremendous character to the city and offer information about its need to defend itself against possible attacks. The Amaria province of Crete is very much dominated by Mount Psiloritis and is very the famed Ideon Cave is located, once reputed to be the home of the Greek god, Zeus. More information about Crete Landmarks and Monuments. 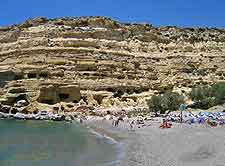 The tourist attractions on the island of Crete are truly quite unique and like no other, and more than enough to fill a holiday of many weeks. However, being do close to a number of further Greek islands, more and more tourists holidaying on Crete choose to island hop, to neighbouring destinations, which are connected by high-speed ferries and hydrofoils. These include the islands of Gavdos, Ios, Kos, Mykonos, Paros, Rhodes and Santorini, all of which are well worth considering as part of a Greek holiday. More information about Crete Attractions Nearby.