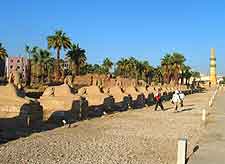 Luxor's landmarks are some of the most iconic to be found in Egypt. The sheer size of many of the monuments within Luxor is quite impressive, not to mention that most can be categorised as astounding architectural feats for their day.

Make sure that you allow time to properly explore the remains of temples and photograph sphinxes while you visit Luxor's main ancient landmarks and remains of days gone by. 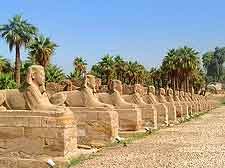 Avenue of the Sphinxes

The remains of these historic sphinxes make some interesting monumental sights that provide good photo opportunities for enthusiastic tourists visiting Luxor. Stretching about 3 km / 2 miles, the Avenue of the Sphinxes is the remains of a walkway that once connected the temples of Luxor and Karnak, and was home to a number of human-headed sphinxes. The walkway's main purpose was to facilitate the movement of the images of Amon, Mut and Khonsu which were carried between the two temples in a once yearly festival.
Open hours: daily
Admission: no charge 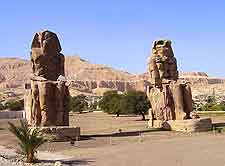 Located on the west bank of Luxor, about half a kilometre east of the Antiquities Inspectorate, the Colossi of Memnon are two giant sandstone statues standing 23 metres / 75 feet high. A temple originally stood on the same site and the Colossi were built as its guardians. The characters of the statues are seated on huge granite plinths and these local landmarks look quite magnificent looming over what is now a busy road. Some other remains can be found in the same area, among which are two headless sphinxes.
Open hours: daily, unlimited access
Admission: no charge 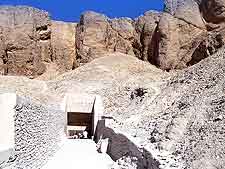 The original Mortuary Temple of Merneptah was all but destroyed. However it has been faithfully reconstructed and is now one of the newest sights of interest on Luxor's West Bank. While many of the interior details (such as wall reliefs) that one would expect to find in a temple of this nature are not evident, the construction offers a highly accurate impression of the exterior and interior architectural features of a 19th Dynasty funerary compound.
Open hours: daily
Admission: charge 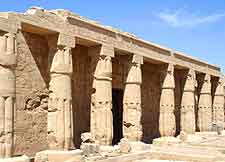 Temple of the Seti 1

Luxor's Temple of the Seti 1 was once one of the biggest temples in Thebes and although much of the original structure no longer remains, those parts that are still standing are certainly worth viewing. The temple dates back to the 13th century and contains many interesting stone carvings with depictions that pay homage to Amon, Mut and Khonsu.
Open hours: daily
Admission: charge