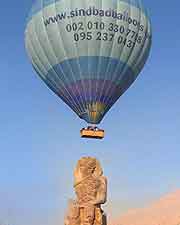 The Egyptian city of Luxor is well known for its annual Festival of Moulid of Abu el-Haggag.

This notable event also attracts large numbers of both domestic and international visitors.

The rest of the year sees the city of Luxor alive with various religious festivals and other commemorative events, including Ramadam and a well-supported marathon each February.