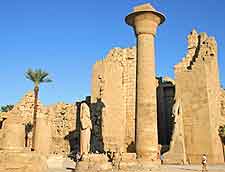 Originally named Thebes, Luxor in history was a major power centre in ancient Egypt during the Golden Age. The pharaohs built many grand monuments, along with vast tombs and burial sites for their queens and royal siblings.

Many of these ancient ruins are actually surprisingly well preserved and include the likes of both the Temple of Karnak and the Valley of the Kings, where some spectacular tombs are to be found.

Luxor is built on Thebes, mostly on the east bank of the River Nile. The pharaohs typically resided in northern Egypt, but chose to head down to this region during the 10th dynasty, and it soon became the centre of governors (nomarchs).


Eventually the Thebans forced out the Heracleopolitans around 2000 BC, to take control of Egypt. The settlement went from a relative agricultural backwater to the capital of Egypt and flourished during the Golden Age (from 1570 BC to 1090 BC), when Thebes was home to a population exceeding one million. 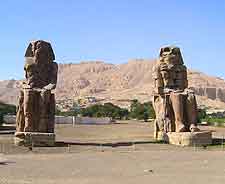 Valleys of the Kings and Queens

The all-powerful, wealthy Theban Pharaohs showed off their prowess by building elaborate monuments in the history of Luxor, many of which remain today in the Theban Necropolis. These include the Valley of the Kings, which is home to many tombs, the most famous of which is that of King Tutankhamen.

All of this craftsmanship meant that large teams of workers were needed. These labourers resided within the Artisan Village (Deir el-Medina), today featuring just the perimeter wall. The Valley of the Queens was built as a fitting tribute to the kings, featuring dozens of burial sites for the pharaohs' wives and families, including Queen Nefertiti.

History of the Temple of Karnak

The celebrated Temple of Karnak (Ipet-isut) is the biggest draw in modern Luxor today, being home to a complex of striking buildings. It is more than 2,000 years old and was built to honour the gods. Most tourists head for the Hypostyle Hall, with its scores of huge columns and vast space.

Another of the major monuments of this illustrious period is the Temple of Luxor, of Ramesses II fame, mainly noted for its Court of Ramesses II and the Abu'l Haggag Mosque. Queen Hatshepsut had a temple built for her out of limestone, known as Deir El-Bahri, during the 18th dynasty, while the Avenue of the Sphinxes was built to connect the temples of Karnak and Luxor, being used to stage grand religious processions at festival time. 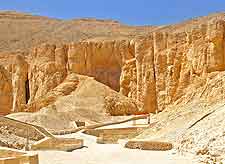 Thebes was sacked by the Assyrians in the 7th century BC and slid into obscurity following the arrival of the Greeks. To add insult to injury, the Romans went about systematically defacing much of the architecture in the 1st century BC.

Luxor lay in relative obscurity for centuries until Napoleon arrived on the scene at the end of the 18th century, followed by teams of eager archaeologists. One of those was acclaimed English archaeologist Howard Carter, a knowledgeable Egyptologist who peered inside Tutankhamen's tomb for the first time on 26th November, 1922. It was the richest find in centuries since the original tombs had all been raided, while this one had remained hidden. Interestingly, King 'Tut' was a minor Pharaoh who died in his early twenties. His magnificently gilded sarcophagus now forms the centre piece of Cairo's famed Egyptian Antiquities Museum.

Incidentally, as per prophesies of curses, Carter and his team suffered a series of mishaps as a result of opening this 'Pandora's box'. Interest in Egypt and its ancient artefacts grew considerably on the discovery of the pyramids. Visitors soon flocked to Luxor to witness this latest discovery first-hand.

The Luxor Museum resides back in the city, near the River Nile, and tells more of the history of Luxor through some amazing artefacts relating to the monuments and tombs of the area.

Over the centuries, the Islamification of the Egyptian Nile and invasion of the Romans, the Ottomans and eventually the British would pale in comparison to early Luxor history. The world's very first international tourists began arriving en-mass when one Thomas Cook organised cruises along the Nile in the middle part of the 19th century. However, the nationalism years of President Nasser and the subsequent modern upheavals centred on Cairo largely passed this city by.