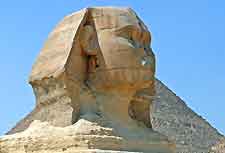 Cairo history most notably dates from the Roman. The city was built up by the Arabs and the Ottoman Empire to become the largest and richest capital in the world at its zenith.

The discovery of the Great Pyramids nearby well and truly put the city on the map for tourists, who also come to see the ancient Islamic district and Citadel within the city, along with the wealth of treasures that detail Egyptian and Cairo history within the Egyptian Antiquities Museum.

Early History of the City

The ancient city of Memphis was located on the outskirts of present-day Cairo. This early Egyptian capital was established by Pharaoh Menes (of the early dynastic period), roughly at the time of 3,000 BC. The city's history is closely connected to the Great Pyramids at Giza and even older pyramids further south, at Sakkara. By the time that Alexander the Great had conquered Egypt and declared himself Pharaoh in 332 BC, this city was in decline and today very little remains.


The Romans were the first to really establish a proper city here and they built their Babylon Fort around 150 AD, Cairo's first settlement. At the time, the area was of little interest to the Egyptians, whose pharaohs generally ruled from Luxor in the Middle Nile during the latter stages of the dynasties. Egyptian Copts (descendents of ancient Egyptians) took shelter here and built churches, many of which remain in the area known as Coptic Cairo. It is the most interesting part of the capital, still featuring the fort and a museum.

Arabs entered Egypt from Saudi Arabia in the year of 642 AD, conquering the country and setting up Cairo in the main from the Babylon Fort. It would be their headquarters and the city grew around the fortress. The ancient Citadel (Al-Qalaa) was one of the star attractions, being home to a number of mosques, including the city's oldest, Ibn Tulun and Al-Azhar, as well as museums. 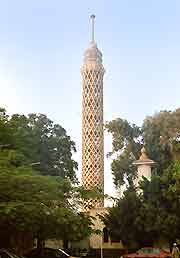 Cairo grew fast and became the world's biggest city in the 1300s. However, the Arabs influence eventually waned as the nearby Turks and Europeans became more powerful. As a result, the burgeoning Ottoman Empire infiltrated Cairo in 1517 and held onto it for some three centuries, before Napoleon conquered it in 1798. This was short-lived, however, and the French were driven out by the Turks and British.

With the help of the British, the Ottoman Empire took historic Cairo back (in 1801) and it became the capital of Egypt under commander Muhammad Ali. The new viceroy took control away from the empire and converted Egypt into a modern state. Europeans came in their droves, especially after the building of the Suez Canal (1869), which linked the Red Sea with the Mediterranean.


History of the Pyramids and Sphinx

Egypt's greatest calling and the city's biggest draw card came with the 're-discovery' of the pyramids and the Sphinx in the mid-1800s. Situated on the nearby Giza Plateau and just outside of Cairo, they include the Great Pyramid, the Pyramid of Menkaure and the Pyramid of Khafre, along with the Great Sphinx and several other, smaller 'Queens' pyramids. 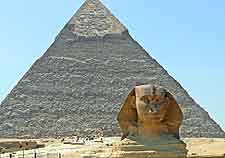 The Great Pyramid is home to Pharaoh Khufu's tomb, while the Great Sphinx features the head of a woman on a lion's body. The pyramids and sphinx, apparently dating from the 3rd century BC or possibly even further back (doubts still remain as to how an ancient civilisation managed such an engineering feat), helped Egypt become one of the world's first tourist destinations, thanks to tours arranged by one Thomas Cook. Cairo has ridden off the coat tales of this ever since.

Priceless treasures and artefacts were retrieved, many of which are on display in the Egyptian Antiquities Museum, near Tahrir Square. Here you will find all sorts of astonishing ancient artefacts that are quite literally famous around the world. These include the Royal Mummy room and Tutankhamen's death mask, along with a huge amount of gold and gemstones.

Over the years, Cairo has been at the centre of Arab nationalism as Egypt has strived to take centre stage in the Middle East. It survived threats of British invasion when President Nasser nationalised the Suez Canal. It was here, too, where Nasser suffered a heart attack and died in 1970, while his successor Anwar Sadat was assassinated in the capital ten years later. Then there was the humiliating war with Israel.

Cairo's Tahrir Square also became the scene of mass demonstrations over Hosni Mubarak's rule in January, 2011. From a relatively small and peaceful demonstration it turned into a mass gathering, with marches, strikes, and civil disorder from all backgrounds and religions. Violent clashes ensued between the protesters and security forces, resulting in the deaths of several hundred. Mubarak eventually resigned from office on 11th February, 2011, making history in Cairo, although unrest continues. This put a temporary stop to tourism, but thankfully nothing in the nearby museum was damaged.