Cairo is home to the most comprehensive selection of restaurants in the whole of Egypt. Serving a true mixture of some really top nosh, restaurants in Cairo are known all over Egypt for their superb dishes and international cuisine.

Many of the best dining venues in Cairo overlook the River Nile and are often visited by the city's wealthiest residents, where it is always necessary to dress to impress. At the opposite end of the scale, Cairo often surprises people by its increasing number of fast-food restaurants, which include well-known burger bars, fried chicken and pizza chains, suiting those with a more limited palate. 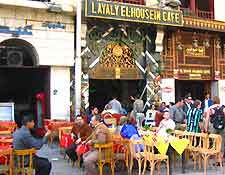 Lunch in the city is usually enjoyed around 14:00, although many restaurants do open from 12:00 until around midnight, while others open as early as 07:00 for breakfasts, particularly smaller cafes in the heart of Cairo. An important point to note, almost every one of the city's restaurants close all through the day during the religious Ramadan period (ninth month of the historic Islamic calendar), only opening after the sun has gone down.

Bland foods are not a part of Egypt's more traditional restaurant scene and you should expect plenty of tasty offerings. Popular menus often include a number of bean dishes, chicken (firekh), vegetable soups made with seasonal produce, salads (make sure they have not been washed with tap water), kofta (spiced meat balls with tomato sauce), kebabs (skewered chunks of meat - mainly lamb) and grilled fish. Of course, no trip to a Cairo restaurant is complete without a dish of kushari (kosheri), a national Egyptian speciality consisting of rice, lentils, chickpeas and macaroni.

Downtown Cairo is the place to head if you are on a budget, and is mainly home to cheap eateries and inexpensive dining options, although a good restaurant can be found here if you search hard enough, particularly around the Sharia Orabi. The Corniche el-Nil is lined with plenty of dining options, with the outstanding Lebonese and Thai restaurants on the first floor of the Semiramis International Hotel being amongst the best in the whole of Cairo.

Other centrally located restaurants in Cairo lie along the Sharia Alfy, Sharia al-Giza, Sharia Tahrir, Sharia Talaat Harb and the Sharia Champollion, where the Abu Tarek restaurant is a particularly popular kushari joint, frequented by both locals and visitors. Many tourists looking to eat out in Cairo head to the familiar Hard Rock Cafe in the Grand Hyatt Hotel on the Corniche el-Nil, where you will also find a rather unexpected revolving restaurant, boasting superb panoramic views of the cityscape.

Further restaurants can be found around Cairo's Giza region and Pyramids Road, which may be a fair distance away from the city centre, but does contain a handful of top restaurants, such as Andrea's, Seasons Restaurant, and the El-Mashrabia, while the bustling fish market is also worth visiting. A number of rather expensive restaurants are located on the island of Zamalek, while for cheap eats in Cairo, the suburbs of both Doqqi and Mohandiseen will not disappoint.