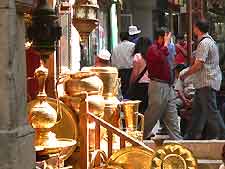 Although many of the festivals are Islamic religious in nature, Cairo is also noted for its international book and film festivals, promoting new writers and directors from the region. Don't expect Rio-like carnivals, there are some interesting celebrations, events and observations throughout much of Cairo.

Over the year, a number of 'moulids' festivals take place in Cairo, where the birthdays of local saints are celebrated. Ramadan, during the ninth month of the Islamic calendar, is a time when everything slows down in Cairo and many shops choose to close early, although the night-time parties and feasting around Islamic Cairo are not to be missed. There is always plenty of things to do in and around Cairo.

Ramadan is the most important part of the Islamic calendar and is not synchronised with Western Dates, so varies from one year to the next. For an entire month Muslims are locked in fasting, which does not permit eating, smoking or 'unclean' activities during daylight hours. Expect Cairo's shops and offices to be closed, streets will be deserted, services reduced and food and drink scarce during the day (outside of tourist areas). Egyptian's take their Ramadan serious so remember not to break the rules openly, but expect plenty to eat after hours.

Eid al-Fitr marks the end of Ramadan, the 'Christmas of Cairo' during which three full days of feasting is enjoyed by even the poorest. This is a time for families to get together, but expect to see the odd gory animal slaughter here and there! Many residents leave Cairo for this holiday to visit friends and family.