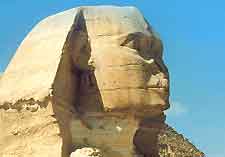 Cairo International Airport is located 22 km / 14 miles from the city's commercial district and is Egypt's busiest airport, serving over 16 million passengers per annum. Egypt's flag carrier, Egyptair, has some 60 percent of the available slots here and has recently joined Star Alliance, prompting an upsurge in the airport's chances of becoming a major hub on the Africa / Middle East / European route.

At present, the airport is undergoing extensive development, which has already seen the arrival of a luxury hotel. The city's metro system is being extended to link with the facility, along with the lengthening of a runway. People-carriers and more efficient links between the terminals are also being laid down. A huge leisure park named AeroCity will soon form an additional part of the infrastructure.

Address: Oruba Road, Heliopolis, Cairo, Egypt, EG
Tel: +202 265 3308
The drive to Cairo's city centre from Cairo International Airport takes you along the Al-Orouba main road, through Heliopolis and over the 6th October Bridge. Another option for getting into the city is the new Autostrad ring road. Heliopolis, where the airport is situated, doesn't have a great deal to attract visitors, although a few imposing, old buildings may be seen from a distance.

Onward transportation from Cairo International Airport to the city centre by hire car is via Saleh Salem Road from Heliopolis, using the 6th October Bridge. This route is well-signposted. There is also a newly-constructed link road, the Autostrad, which leads to the Cairo Ring Road. Both routes are subject to heavy traffic at rush hours.

As yet, there is no train service from the airport, although a Cairo Metro link is under construction.

Taxi ranks are located outside the Arrivals halls and the journey to the city centre takes upwards of 30 minutes - haggling is essential. The best way to travel is by the luxury, microbus or mid-sized limo services, or by hiring a London black cab for your journey.