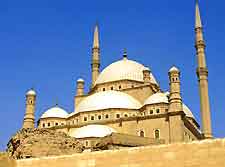 Cairo is full of ancient landmarks, which are numerous and stand alongside more contemporary monuments that are the result of modern Egypt under the legacy of founding leader Abdul Nasser.

The monuments of Cairo are all fascinating to visit and offer an insight into ancient civilisations and customs.

Highlights around the city include the world-famous Great Sphinx, the Citadel and also the Cairo Tower. 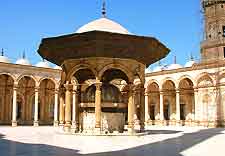 An obligatory stop on the 'taxi tour', the Citadel offers the best free views of the city, exactly as the Turkish Sultan Selim saw it when he conquered the city. An enormous stone fort and bastions still stand despite many battles on this site, but it is the imposing Mosque, adjacent medieval palace and museum which make the trip up here all worthwhile.
Open hours: call for details
Admission: call for details 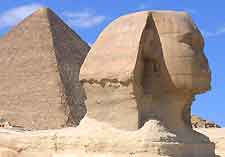 Tel: +20 02 383 8823
Despite losing its nose to French cavalry target practice during a brief French occupation in the 18th Century, the lion-like Sphinx remains a remarkable icon of Egyptology. The Sphinx sits guarding the Great Pyramids in Giza and is noted for its mythical identity of lion's body and woman's head. Despite begin dwarfed by the pyramids, the Great Sphinx is an enormous limestone structure in remarkably good shape for it age - said to be more than 4000 years old.
Open hours: daily - 09:00 to 16:45
Admission: charge 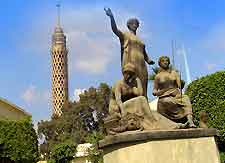 A more modern and contrasting landmark, the Cairo Tower is more likely to endear the locals with pride than some of the more ancient relics. With a restaurant on top there's a good excuse to find your way up there to admire the views that spread beyond central Cairo to the distant desert landscape. A fun additional attraction that will interest the kids is the Pharaonic Personal Analysis, which provides Egyptian hieroglyphics together with an interesting personality analysis, available in both Arabic and English.
Open hours: call for details
Admission: call for details

Marking the northern boundary of the old Fatimid City, the historic Bab el-Futuh gate also goes by the name of the Gate of Conquest. This striking landmark is a massive arch carved from one single block of stone and is bordered by two rounded towers. In days of yore returning pilgrims from Mecca would symbolically re-enter the city via this gate.
Open hours: call for details
Admission: call for details 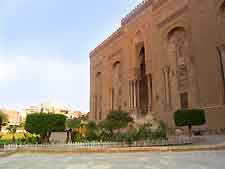 Mosque and Madrasa of Sultan Hassan

Reputedly one of the world's largest mosques, this national treasure is a beautiful example of Islamic art with its accompanying madrassas. Cairo's Mosque and Madrasa of Sultan Hassan was completed in 1366 using stones from the pyramids and is held in high regard by locals and Moslems the world over.
Open hours: call for details
Admission: no charge

This historic church dates back to the 6th century AD, was restored in the 12th century, and forms the basis of Cairo's significant Christian faith. Known as the 'Saint of the two Swords', St. Mercurius Church still sits on its original foundation.
Open hours: call for details
Admission: no charge