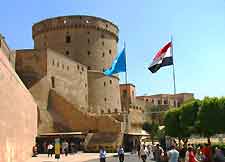 Most tourists find themselves interested in only a handful of the main districts, including the downtown area, Old Cairo, the Citadel area and remote Giza - site of the great pyramids. Here are Cairo's most noteworthy districts, neighbourhoods and locations. 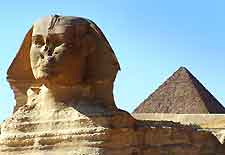 Best known for the site of the great pyramids that put Cairo and Egypt on the world map, Giza is an otherwise unremarkable outlying district that was swallowed up by Cairo at the turn of the last century. Antiquity and modern conveniences sit side by side in a suburb which offers the best elevated views of the pyramids from the second floor of a nearby KFC! Nonetheless, the suburban development for locals blends abruptly with a collection of souvenir shops, restaurants and the odd hotel, then suddenly becomes desert, with the world's last standing 'Wonder of the Ancient World' as a backdrop. 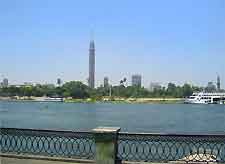 Dating from the mid-1880s when an area along the Nile banks was drained for development, central Cairo is perhaps the city's busiest area now. Located on the East Bank, this district boasts some impressive buildings and includes the best of the shopping and many hotel choices. Here you will also find the much-visited Egyptian Museum, as well as the more recent Abdeen Palace Museum. Sometimes chaotic, but excellent for people watching, central Cairo is where most tourists start their Egypt holiday experience. 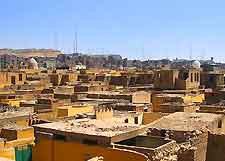 The touting taxi driver-cum-tour-guides will invariably bring you here after the museum and pyramids, for Islamic Cairo is one area of significant national pride. Forming the original medieval centre of Cairo, this district is loaded with history and culture, with plenty to point your camera at. Highlights here include the elevated Citadel, impressive Al-Azhar Mosque, Khan el Khalili bazaar, City of the Dead cemetery and Gayer-Anderson Museum. The Citadel is perhaps the most striking landmark in the entire city, with great views.

The more modern side of Cairo, Mohandissen is all business by day and entertainment by night, albeit somewhat subdued by European expectations. Here you'll find office and residential towers, plenty of Egyptian-styled designer boutiques, and a generous selection of dining venues. All the same, you can escape to quieter restaurants and even some bars down the maze of back alleys.

Perhaps the most intriguing suburb and a must for any pious traveller is Coptic Cairo, which has some of the oldest attractions of historical importance. A Young Jesus Christ was said to have stayed here while seeking refuge along with his family in Cairo, and there are a number of 2000 year old chapels and churches in various states of renovation. But you'll also discover a synagogue and mosque amongst the timeless lanes of this multicultural area.