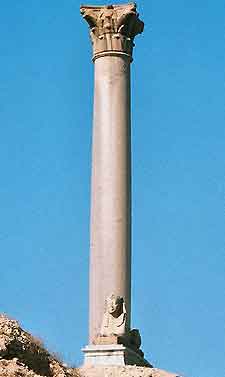 Alexandria history is rich and exciting, on account of it being a 'Hellenic' Greco-Roman centre. It once featured amazing landmarks, such as the Lighthouse and Library, although damage wrought by the Romans and British, along with various earthquakes and tsunamis, have altered the landscape over the eons.

Alexander the Great founded Alexandria in 331 BC as something of a stepping-stone to the fertile Nile Valley from Greece. The Tombs of Al-Anfushi (250 BC) hail from the early days - best seen for their paintings, along with the Qaitbey Fort. The latter sits on the site of the famous lighthouse and tourists arrive here via a scenic causeway.

The Lighthouse of Alexandria

The ancient lighthouse was built by Ptolemy II on the island of Pharos. It was around 122 metres / 400 feet high - a mighty feat at that time, and had three distinct floors. To guide ships, the mirrors reflected sunlight by day, while fire was used by night. Unfortunately, the lighthouse was badly damaged by earthquakes in the 1300s and there are no remains today.


The Library of Alexandria, a repository of learning, also hailed from this time, although it was eventually destroyed by the Romans. Alexandria was also home to a sizeable Jewish community and the Greeks famously translated the Bible for the first time here.

As to Roman history in Alexandria, they left a big legacy, including an amphitheatre (dating from the 2nd century AD) and the granite Pompey's Pillar (297 AD) at the Serapium. The ruins are well preserved and tourists can also see artefacts from the time of the Romans at the Graeco-Roman Museum, while the National Museum and the Museum of Fine Arts are also impressive.

Tsunami and the Persians

The Crete earthquake of 365 AD was an especially significant date in local history. It generated a giant tsunami that crossed the Mediterranean and wrought havoc on the port, along with the nearby port at El Alamein. This fateful day is still commemorated today.

Alexandria was the principal city in Egypt, and certainly that of the Hellenic world at the time, and only Rome surpassed its wealth and stature. On the division of the Roman Empire, it passed to Byzantium, before being conquered by the Persians in 619 AD and then the Arabs in 641 AD. They found a new capital for Egypt, namely Cairo. However, despite all of this, Alexandria remained an important trading port.

The Ottoman Turks conquered Alexandria during the Battle of Ridaniya (1517) and their rule lasted until the very end of the 18th century, when Napoleon stormed the city. The British retook it during the Siege of Alexandria (1801) and later, Albanian commander Mohammed Ali modernised it along with Egypt in general.

Strife in 1881 saw the slaughter of many Europeans during the Orabi Rebellion and the subsequent bombardment of Alexandria by the British. It recovered, despite the old core being heavily damaged, and beautification came by way of the Montazah Palace and Gardens, built by King Farouk in 1892. The discovery of the Kom el Shoqafa Catacombs in 1900 is also significant in the history of Alexandria, since they are actually Egypt's largest Roman burial grounds. 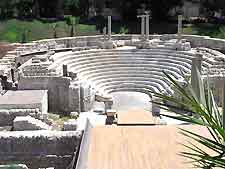 WWII came and went, with fierce battles in nearby El Alamein, while celebrated poet Constantine P. Cavafy recorded the affair. Depression hit in the 1950s after Gamal Abdel Nasser kicked out foreigners and nationalised industries, dampening the economy, while Israel bombed Alexandria in 1954, the same year that an unsuccessful assassination attempt was made on Nasser.

Today, historic Alexandria is Egypt's second-biggest city and features a modern port. It recently saw big protests during the ousting of President Mubarak, although tourists still come for its many ancient sights and the European-looking Corniche (waterfront promenade).