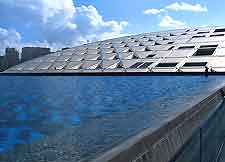 The vast majority of Alexandria's most significant landmarks and monuments are leftovers from the Romans. These ancient monuments are unique and fascinating to tour. Not to be missed are the Roman Amphitheatre, the only one in Egypt, and Pompey's Pillar, a huge freestanding structure.

More modern landmarks in Alexandria include the ornate Abbas al-Mursi Mosque, while the city's harbours hide hundreds of ancient treasures, which can only be observed on a diving trip. 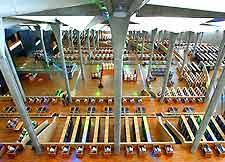 Address: El Shatby, Alexandria, 21526, Egypt, EG
Tel: +203 4839 999
The ancient city of Alexandria was once home to several libraries, inspired by Alexander the Great, making the city a cultural centre to rival Athens. This glass-and-steel state-of-the-art library is an important modern landmark of today and has some interesting architectural features, including a huge granite wall that represents symbols from all known alphabets. The library also contains museums, a children's library and a library for the blind.
Open hours: call for details
Admission: no charge

Address: Anfushi, Alexandria, Egypt, EG
The mosque is open to visitors who want to explore its decorative inside, with the interior of the main dome being a highlight. Visitors must remove their shoes before entering and men and women must enter through separate doors. The white exterior of the mosque is magical in appearance, with ornate detail. Built in the 1940s, there has been a mosque on this site since the 13th century.
Open hours: daily
Admission: no charge, please note that a minimum fee is charged for the return of your shoes. Photography is permitted within the mosque, although you are expected to pay for this privilege 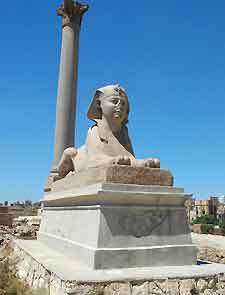 Despite the name, this pillar was raised in honour of the Roman Emperor Diocletian for saving the city from famine in 298 AD. However, the monument came to be known as Pompey's Pillar by the French. The Corinthian-style column is constructed from red granite, which had to be transported along the Nile and with a fairly elevated setting, dominates this part of Alexandria. In Roman times, the top could be reached by climbing a rope, but sadly this method is not available to today's tourists.
Open hours: daily - 09:00 to 16:00
Admission: charge

Located not far from the two great harbours, the ruins of this former temple are worth a short visit by those interested in the city's Roman past. Once a lavish religious site boasting porticoes, a propylaea, libraries and parks, little remains of the Caesareum today but the foundations.
Open hours: daily
Admission: no charge 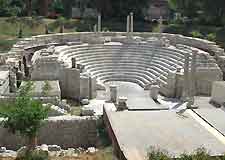 History buffs visiting Alexandria will enjoy these well-preserved ruins of the only Roman amphitheatre in Egypt. Although the surrounding modern high-rises somewhat infringe on the atmosphere of the excavated site, the 2nd century AD ruins remain interesting. Next to the theatre, the newly discovered remains of a Roman villa are also worth seeing for the exquisite mosaic floors.
Open hours: daily 09:00 - 16:00
Admission: charge

A popular place to go diving, those who explore the city's harbours and coastline will be rewarded with some ancient treats. The Roman city was destroyed by a series of earthquakes and tsunamis, leaving behind many hidden treasures which have been submerged below the water level ever since. Should you wish to explore these hidden monuments, contact one of the city's diving clubs. While some of the artefacts have been removed from the water and put in museums, plenty remain.
Open hours: 24 hours
Admission: no charge