Getting Around, Charlotte Travel, Transport and Car Rental 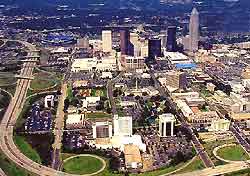 Located just north of the border with South Carolina, Charlotte is a major travel and transportation hub for the Carolinas. Charlotte is intersected by several major interstates, namely I-77 heading north-south and I-85 heading northeast-southwest, while the I-40 heads east-west and passes Charlotte around 40 miles / 64 km to the north.

The city of Charlotte is also served by a busy airport, with other major transport options including several Amtrak rail services, taxi travel and a host of bus and coach services.

Address: 5501 Josh Birmingham Parkway, Charlotte, 28208, North Carolina NC, USA
Tel: +1 704 359 4000
Located west of the city off I-85, Charlotte Douglas International Airport acts as a gateway to the Carolinas. The airport services on average more than 500 daily flights to and from major destinations across the country, as well as regular trans-Atlantic flights, involving some 25 million passengers per year. Shuttle services, taxi travel and car rental are all popular methods of ground transport at the airport, while some hotels offer their own courtesy pickup service from the airport. 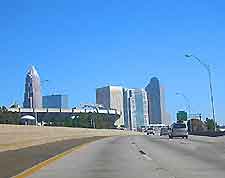 Several car rental companies have a presence at the airport and also at various locations across the city. Public transportation is fine for getting around Charlotte city center, but a car is essential if you intend to travel outside of the city and explore the outer lying areas.


Interstate 77 runs through Charlotte, heading north towards Virginia and intersecting with the east-west I-40 around 40 miles / 64 km to the north. The I-85 heads southwest, offering a fast way to travel towards Greenville, South Carolina, and northeast to link up with the I-40 at Greensboro. Interstate 85 and I-77 cross paths near Uptown Charlotte and can be the site of traffic jams during peak driving periods, especially from 16:30 to 18:30. 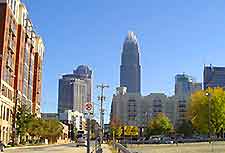 Greyhound and Carolina Trailways serve the Charlotte area, as well as major destinations across the country. Even though traveling by bus is cheap, long distance bus travel can be uncomfortable and tiring. Buses are a great way to travel around Charlotte, with the Center City Circuit operating a free shuttle service in Uptown from Monday to Friday. The Charlotte Area Transit Authority (CATS) also offers convenient buses which provide travel throughout the city.

Daily Amtrak train services travel to Washington DC, Atlanta and points farther afield depart from Charlotte in the early hours of the morning. There is also a daily rail service from Charlotte, providing reasonably-priced travel to Raleigh and Durham.

Taxis are readily available at the airport as well as at major points throughout the city. 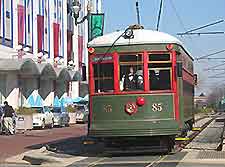 Trolleys in Charlotte have made a comeback after being abandoned in favor of buses back in 1938. The colorful trolleys, all resembling their original splendor and charm, travel to numerous popular sites and attractions in Charlotte's Southend-Uptown area. The trolleys travel seven days a week, from mid-morning through to 20:00 (23:00 on Fridays and Saturdays, and 18:00 on Sundays).