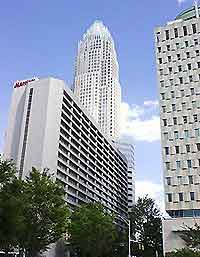 Hotels in the Uptown area of Charlotte tend to mainly cater for business visitors, meaning that they are busy Monday to Friday, and subsequently quiet at the weekend. Therefore, much of the accommodation in this part of Charlotte offers enticing lodging packages at the weekend, suiting tourists looking for a short break.

There is also a huge choice of budget motels and two- and three-star hotels close to the Charlotte Douglas International Airport (CLT), which is some 7 miles / 11 km to the west of the city and next to the Billy Graham Parkway. Some of the cheapest and most popular airport accommodation is to be found on: 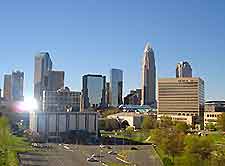 Budget hotels in Charlotte are especially concentrated along the Interstates I-77 and I-85, as well as around East Irvington, South Craycroft Road, the West Starr Pass Boulevard and Sugar Creek Road, which is where the Days Inn North Speedway is to be found, right alongside the Sugar Creek District Park. On Sunset Road, the Super 8 Motel is a fairly reliable bet and conveniently just a short drive from the Metrolina Expo Trade Center on Statesville Road, where many important local events are staged, including regular antiques fairs, flea markets and motor shows. The Super 8 Motel on the Texland Boulevard is another popular choice, due to its proximity to the Carowinds Amusement Park, although it does continue to receive mixed reviews.

For just a little more money, you will be able to move up the lodging scale and consider three-star accommodation around central Charlotte. Particularly notable is the Dunhill Hotel on North Tyron Street, which is a fairly historic building dating back to 1929 and now rather dwarfed by the surrounding skyscrapers. Just a short stroll away from the Dunhill Hotel is the acclaimed Discovery Place attraction, as well as St. Peter's Episcopal Church and a number of restaurants. 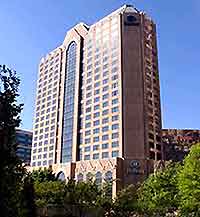 Many of the four-star hotels in Charlotte really are comparably priced with three-stars and therefore well worth considering. Within the Uptown district, the Marriott City Center on West Trade Street certainly stands out, although does experience some city noise and parking is a notable additional charge.

Close by and on East 3rd Street is the Hilton City Center, which has recently enjoyed a major refurbishment program costing some $25 million. Located just across from the city's Convention Center, the Hilton is within easy walking distance of attractions, such as the Bobcats Arena and the Blumenthal Performing Arts Center.

Rather more expensive is the five-star luxury accommodation at the Ritz Carlton Charlotte Hotel on East Trade Street, which towers for 18 storeys and is just across from the EpiCenter and the Time Warner Cable Arena. A mere 1 mile / 1.5 km from the Ritz Carlton is the Bank of America Stadium, where football matches are regularly staged and watched by up to 73,000 spectators.