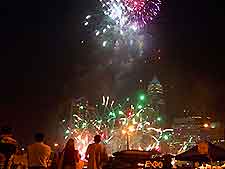 Spring is a great time to visit Charlotte and its surrounding areas and to take in the city's flowering beauty. Sporting events, music performances and arts and craft festivals are usually held during Charlotte's summer months, although some take place in early autumn and late spring.

Winter in Charlotte can get quite chilly and it is usually a quieter time in terms of festivals and events. Below is a list of Charlotte's main yearly festivals, events and seasonal things to do.