Getting Around, Hawaii (The Big Island) Travel, Transport and Car Rental 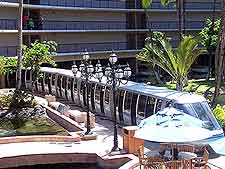 Those wishing to explore the Big Island and travel to the main beach resorts, will find that buses really are the only public transport on offer here. When traveling on Hawaii, it is also worth considering the Big island as two individual destinations, east and west, since is takes just over two hours to travel between Hilo (east) and Kailua-Kona (west), and approximately six hours to complete circle the coastline.

Bus transport on Hawaii is generally quite adequate, although does tend to be infrequent and therefore, unless you have chosen to hire a car, you may well find yourself planning your day around the bus timetable. However, if you are choosing to base yourself in just one resort on the Big Island, it really is quite adequate just to travel to sights on foot, use local buses, or even hire a bicycle. 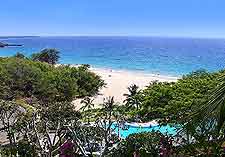 The Big Island of Hawaii is home to no less two two prominent airports. Hilo International Airport (ITO) is located around 3 km / 2 miles east of downtown Hilo and far eastern coast. This busy facility serves the domestic carriers of Go, Island Air and also Hawaiian Airlines, which fly to destinations such as Honolulu (Oahu) and Kahului (Maui).

On the opposite western shore, Kona International Airport (KOA) serves the neighboring town of Kailua-Kona, as well as the various resorts within the Kona region. This airport features a larger number of airlines, which travel to major cities in Canada and the USA, as well as a number of other Hawaiian islands and even Tokyo (Japan). Regular inter-island flights use Kona Airport each day, with many holiday makers arriving from the mainland, via Honolulu International Airport (HNL). Some local flights also arrive here from Hilo, on the other side of the island. 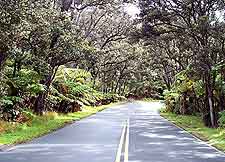 Hiring car transport is without question the easiest way to travel around the Big Island. However, since some of the best attractions and beaches can only be reached along dirt tracks, many visitors to Hawaii do choose to rent a four-wheel-drive vehicle or even a jeep. It is worth check your rental agreement to see where you are 'officially' permitted to drive, since most companies do not allow driving on unpaved roads of any description.

Budget travelers holidaying on Hawaii are often surprised to find that the Big Island has little to offer in the way of public transport. Whilst there are so buses plying the island, the services are really quite limited and in general, buses only travel between the main towns, resorts and attractions, such popular destinations include Hilo, the famed Volcanoes National Park, and beaches around Kona. 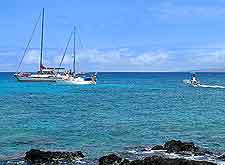 Inter-island ferries is a relatively new addition to the Big Island's transport scene and a new Super Ferry service has been recently introduced, providing high-speed travel to Kauai, Maui and Oahu.

The main port is located in Hilo, some 5 km / 3 miles to the east of the city centre and protected by a lengthy, rocky seawall.