Hawaii (The Big Island) Weather, When to Go and Climate Information 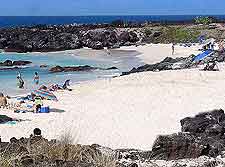 The Big Island of Hawaii enjoys a typically tropical climate, which generally falls into just two seasons. The summer (Kau) months stretch between April / May to October, and the temperatures really only different slightly from the winter (Ho'oilo) season from November to March / April, when wetter weather is more likely, although not usually enough to spoil a holiday.

Temperatures throughout the year on Hawaii's Big Island don't vary greatly, generally averaging between 27°C / 81°F and 29°C / 84°F. The climate on the Big Island does very however, depending upon where you choose to stay. 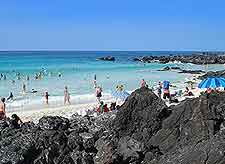 The eastern and northern sides of the Big Island of Hawaii tend to experience the breeziest weather, with coastal winds bringer more moisture and humidity in the air, and jungle-like conditions. If you are staying on the western and southern sides on the Big Island, then you can expect more desert-like weather.

However, that said, wherever you stay on Hawaii, you will never be far from gorgeous stretches of sandy beachfront, with the island boasting some of the most beautiful coastal stretches imaginable and plenty of sunny weather to go around. Hilo, the biggest town on the Big Island, is also one of the wettest, with annual precipitation levels between around 457 cm / 180 inches, while some 95 km / 59 miles away, the rainfall at Puako rarely tops 15 cm / 6 inches per year.