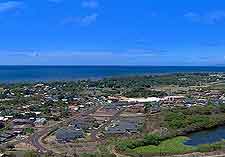 When compared to the other main islands of Hawaii, (Big Island, Maui and Oahu), Kauai is noticeably small and less developed, although is graced with simple natural beauty. The center of Kauai is very much presided over by the imposing volcanic peak known as Mount Waialeale, around which are some rather spectacular waterfalls are large expanses of lush, tropical, Hawaiian rain forest.

Lihue is the island's proud capital and home to the main airport, which lies just a matter of minutes to the east. The Kauai Tourism Bureau is located within Lihue, along Rice Street, and offers up-to-date tourist information for arriving visitors. A number of beautiful beaches are close by, particularly around the southerly resort of Poipu, where you can swim and snorkel all through the year. The Na Pali coast and northerly Hanalei Bay are also worth exploring. 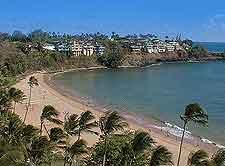 Hotels are widespread on Kauai, with a particularly fine choice to be found within the capital of Lihue, along the Coconut Coast, and around the resorts of Kapaa, Kealia, Poipu and Princeville.

Accommodation is also located within easy reach of the very scenic Waimea Canyon and the Kahili Mountain Park. 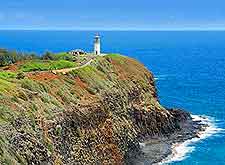 The seemingly inexhaustible supply of heavenly beaches is one of the main reasons that Kauai has gained a firm footing on the Hawaiian tourism map, with mile upon mile of stunning coastline, some of which has been used for backdrops in a number of Elvis Presley films, and even in some parts of 'Raiders of the Lost Ark'. Numerous beaches around Kauai are highly suitable for families, as well as those wishing to get aquatinted with the marine life, with both snorkelling and scuba diving being eminently possible in the clear waters around stretches such as Kee Beach, Lawai Beach and the Anini Beach Park, where a large reef is situated just offshore.

If you are looking to sightsee on Kauai, then consider joining the Historic Waimea Walking Tour, taking a helicopter ride high above the island, or relaxing onboard a cruise around the coastline, where you will often encounter dolphins, and in the winter months, even migrating North Pacific humpback whales. More information about Kauai Tourist Attractions and Kauai Beaches. 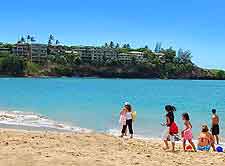 Spread around the island are some truly wonderful natural landmarks, which has been formed over a period of many, many thousands of years. Several waterfalls stand out are being suitable impressive, such as the Opaekaa Falls, the Wailua Falls, and also the Manawaiopuna Falls of Jurassic Park fame. For hiking trails on Kauai, you are unlikely to find any to beat those around the Waimea Canyon (the 'Grand Canyon of the Pacific') and the Kokee State Park, which offer a different scale of beauty that is really quite unexpected and an experience like no other. Something quite different and created by man is the Kilauea Point Lighthouse, where the views of the nearby islet of Mokuaeae and its Hawaiian seal colony are always a true holiday highlight. More information about Kauai Landmarks and Monuments. 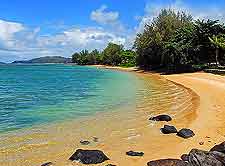 Kauai is a very green and lush part of Hawaii and is often referred to as the 'Garden Island'. Many different aspects of its cultural heritage are celebrated at museums around the island, such as the Kokee Natural History Museum within the Kokee State Park, or at the Kaieie Foundation in Kapaa, on the famed 'Coconut Coast'. For information about the island's long and fascinating history, the Kauai Museum in Lihue is where you will need to go, or alternatively the West Kauai Technology and Visitor Center in Waimea. If you decide that you would like to purchase a genuine Hawaiian painting, then head to Hale Mana Fine Art in Poipu, or to the Kahn Galleries in Kappa's Old Koloa Town, where you can pickup all kinds of art works without breaking the bank. More information about Kauai Museums and Kauai Art Galleries. 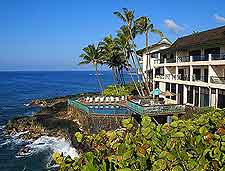 By boat or by plane, the Hawaiian islands to the south-east of Kauai are just a relatively short journey away, lending themselves to a spot of island hopping. Oahu is the closest of the main islands and boasts an exceptional tourism infrastructure, with tourists being able to enjoy some of the best surfing and shopping that Hawaii has to offer, at Waikiki Beach and the buzzing city of Honolulu respectively. Further south of Kauai is Maui, which contains sights such as the rock pinnacle of the Iao Needle, the Blue Angel Falls, and the Black Rock, where the snorkelling conditions are hard to better. Maui is also home to the Haleakala Crater, which lies atop a giant volcano and is worth exploring for the boundless views alone. More information about Kauai Attractions Nearby. 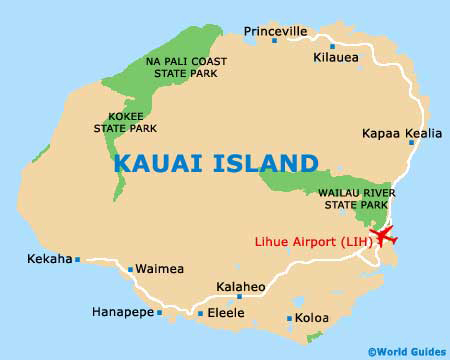