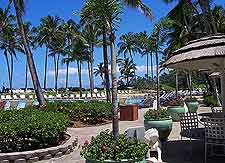 The restaurants on the Big Island of Hawaii are extremely widespread and the most tourist-friendly tend to be concentrated within the main resorts, particularly around Hamakua, Hilo, Kona and Kohala. Dining out is always an enjoyable part of any Hawaiian holiday, and tourists staying on the Big Island will be in for a gastronomical treat if the like fish - or even spam (canned luncheon meat), which is also surprisingly popular throughout Hawaii and has been since being introduced during WWII.

Tuna regularly makes an appearance on many a restaurant across the Big Island of Hawaii, being served either raw and with soya sauce, as Japanese-style sushi or sashimi, or as griddled steaks. Freshly caught fish is also often poached, stir-fried, sautéed, stewed or served as a soup or risotto, with popular dining choices including groupers, sea bass, snappers and swordfish, amongst others. Ono (wahoo) is another popular fish on the Big Island and in Hawaii, 'ono' also means 'delicious', so you are quite likely to use this word at some stage. 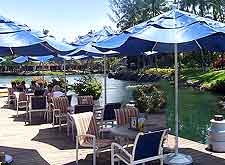 Many reasonably priced eateries reside within Kailua-Kona, being highly suitable for families, often being located within hotels, such as the very popular beachfront King Kamehameha's Kona Beach Hotel on Palani Road, or the Kona Bay Hotel on Alii Drive, next to the Kona Marketplace.

Restaurants around the Kona area of the Hawaii Big Island can also be found along Henry Street, Kahakai Road, Kuakini Highway and also on the Ololi Road, between both Kuakini and also Palani. Do bear in mind when dining out in the Kona area that this part of the Big Island has little in the way of nightlife, and so its restaurants tend to close early. 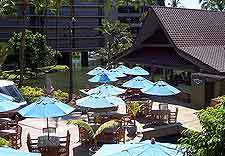 The 'Gold Coast' of Kohala is known for its stylish restaurants, which tend to be on the expensive side, with a number of very popular dining venues being based around the resorts of Mauna Kea, Mauna Lani and Waikoloa.

The bustling city of Hilo is also home to a huge number of restaurants, the largest cluster on the Big Island of Hawaii. Many of these stand alongside Hilo's seafront, on the Kamehameha Avenue and Banyan Drive, ranging from cheap cafes and fast-food joints, to hearty Hawaiian fare and buffets at topnotch eateries.