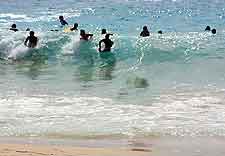 Culture is an integral part of life on the Big Island and all through the year, Hawaii offers festivals, colourful events and endless things to do, where visitors can experience local traditions and celebrations at their best. Events are staged at venues all across Hawaii, with the most popular including music festivals, country fairs, theatre and sporting competitions.

Many tourists are surprised to learn that the Big Island has a very rich cowboy heritage and so during the course of the year, several large rodeos take place here and have done for almost 40 years, with the Annual Kona Stampede Rodeo in March being amongst the biggest and the best. Also of note are the Aloha festivals, which are held all over the main islands of Hawaii. Each September the Aloha events come to the Big Island, with crowds of literally thousands regularly joining in the fun, particularly around Hilo and Hoolaulea.