Toronto Weather, When to Go and Climate Information 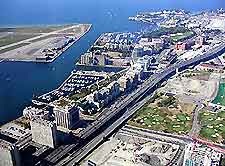 Toronto's seasons are easily distinguishable from one another, with extreme weather conditions often experienced in both the summer and the winter. Although Toronto's winter climate and weather can be less severe than other parts of the country, it is wise to go well prepared if you are planning to visit Toronto during the chilly winter months.

However, it's not all snow and icicles. Toronto enjoys long, hot summer days and sunny weather thanks to its southerly location, while springtime is mostly warm and pleasant, making it the most welcomed season after the winter's bitter snowstorms that sometimes strike as late as March.

Snowy weather is common each winter and the Toronto area often experiences a complete shut down that can last anything from a few hours to a few days during extreme blizzards. It is during this season that visitors and residents alike make use of Toronto's underground shopping complexes and other indoor activities, while Toronto's parks become a playground for winter sports including sledding, cross-country skiing, ice skating and ice hockey. Toronto residents cope very well with the snow and cold weather, and the majority of the time you will find the sidewalks cleared and the roads salted before you've even had your morning coffee. Average winter temperatures in Toronto are around -6°C / 21°F, with temperatures sometimes reaching as low as -10°C / 14°F. The season generally lasts from November to March.

A wonderful time to visit Toronto, springtime is when Toronto's buds and bulbs begin to bloom after months of snow. The resurgence of life and nature is evident and you will find the locals jump at the opportunity to sit out on the patio and enjoy a BBQ once more. Average spring temperatures range between 6°C / 43°F and 12°C / 54°F.

Average summer temperatures in Toronto range between 12°C / 54°F and 20°C / 68°F, with temperatures known to rise as high as 27°C / 81°F during heat waves. With such warm summer weather, outdoor activities and al fresco dining is the order of the day in Toronto, with the summer season lasting from June to early October. Toronto residents make use of the agreeable weather and climate in the summer by hosting many popular events and festivals during this season.

The most colorful season of the year in Toronto, fall sees the tree's leaves take on a rainbow of colors before the winter weather kicks in and everything become bare and stark. Toronto's climate is often pleasant during this season, with warm afternoons and light breezes. Temperatures in fall vary, with the average temperature being around 10°C / 50°F to 15°C / 59°F.