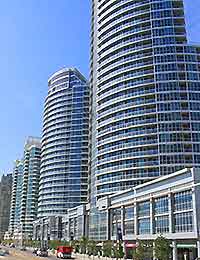 Toronto is a unique North American city, spread out over an extensive area, with fascinating pockets of ethnically-rich communities, commercial districts, shopping complexes, architecturally interesting areas and vast parklands throughout the Toronto area. Located on the northern shore of Lake Ontario, Toronto's Harborfront district bustles with activities that will entertain the whole family, while a short ferry ride out to the Toronto Islands makes for a great day trip out of Toronto.

Some of the most interesting districts in Toronto include Greektown, with its lively restaurants and nightspots, while Toronto's Chinatown district is home to delicious Asian treats and a colorful atmosphere. For a more authentic Canadian experience, head to the Cabbagetown district of Toronto, where you can admire some of the city's 19th-century architecture, while downtown Toronto will thrill those who are lovers of the big smoke, with its glistening skyscrapers and iconic structures. Here are Toronto's main districts, neighborhoods and locations.

Boasting an impressive architectural heritage of Victorian homes and pre-WWI houses, Cabbagetown is one of the oldest districts in Toronto. Once predominantly inhabited by Irish immigrants, the area is aptly named after the large number of residents who grew cabbages in their front gardens at this time. Now a sought-after and trendy place to live, the district hosts a number of coffee shops and is a pleasant place to stroll and soak up Toronto's atmosphere. 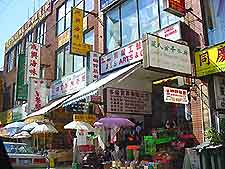 Toronto is a multicultural melting pot, with a huge Asian population, largely centered around the Chinatown district, although other pockets of Asian-based communities are dotted around Toronto. Characterized by brightly colored buildings and lights, this suburb is the place to head for everything from Chinese herbal medicines to delicious, authentic Chinese food. 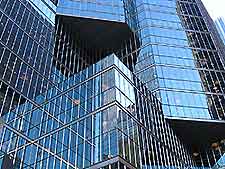 The downtown district of Toronto is laid out on a rectangular grid pattern, with the primary north-south route through Toronto being Yonge Street. A largely commercial district, downtown is home to some of Toronto's most famous buildings, including the Toronto Stock Exchange, Canadian Bank of Commerce, CN Tower, Roger Center, Royal Bank Plaza and the TD Center. With the absence of height restrictions on buildings in the downtown district, Toronto now boasts a formidable skyline, instantly recognizable by the silhouette of the tallest freestanding structure in the world, the CN Tower, and the home of the Blue Jays, the Sky Dome. Toronto's downtown district is also home to the city's best shopping opportunities, with a unique and extensive underground Toronto, where shoppers can retreat when the winter blizzards begin.

The best place in Toronto to enjoy a sweet baklava, the East End district is home to a large Greek community, based around the intersection of Pape and Danforth. Apart from supporting a host of venues where you can enjoy Greek desserts, this area of Toronto is teeming with restaurants and nightspots, while is it also host to the Taste of the Danforth, an annual street festival boasting authentic Greek food and music.