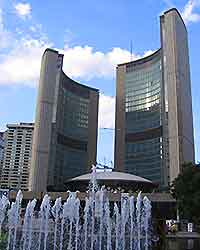 Canada's largest and busiest air facility is the Toronto Pearson International Airport, one of the world's main air hubs. Every year, more than 33 million passengers fly through here en route to Canada's largest city and the province of Ontario. By comparison, Canada's second-busiest airport in Vancouver only handles roughly half the passenger traffic of Toronto Pearson.

Toronto Pearson's two terminals both handle domestic and international flights. They are connected by the modern LINK Train people mover and contain an impressive array of amenities for passengers. This modern airport offers Wi-Fi Internet for its guests, along with special attractions like a dinosaur exhibit in Terminal 1, the Toronto on Film exhibit in Terminal 3, and a series of permanent and rotating art exhibitions.

Address: 3111 Convair Drive, Toronto AMF, Ontario L5P 1B2, Canada, CA
Tel: +1 416 247 7678
Located about 17 miles / 27 km northwest of downtown, the Toronto Pearson International Airport is easily accessible by a range of public and private transportation options. Being in the northern corner of the city, the airport is near the suburbs of Rexdale, Malton and Downsview.

Major highways approach the Toronto Pearson International Airport from every direction in this sprawling metropolis, ensuring quick and easy access when driving. The airport controls some 360 licenced taxis and more than 275 limousines, ensuring that quality and fairness is present. All fares within the Greater Toronto Area (GTA) are preset based on destination.

The Express Bus is the most convenient and affordable way to reach destinations in the downtown Toronto area. For out-of-town destinations in Ontario and even border cities in the US, Aboutown Transport Limited provides transport.