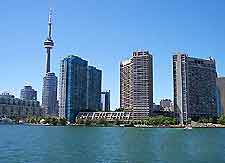 With Toronto being such a popular tourist destination, hotels are plentiful, and there are literally hundreds of different establishments and accommodation options to choose from. However, lodging in Toronto is well-known for being pricey and good-value hotels can be hard to come by.

Outside of the relatively quiet winter months, advance reservations for any decent accommodation are absolutely essential, and from Victoria Day (mid-May) until the latter part of the summer season, many hotels are filled to capacity. Lodging rates are known to rise dramatically during the city's most prominent festivals, such as Pride Week in June, the Toronto Fringe Festival in July and the Marathon in October, which regularly attracts more than 50,000 people. 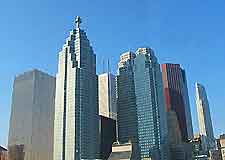 Budget accommodation is available if you look hard enough, with a number of busy youth hostels providing the cheapest lodging around, such as the Hostelling International Toronto Hostel on Church Street, in the Old York area. Of note, some youth hostels, bed and breakfasts, and guest houses do not charge any tax, and this is therefore reflected in the price.

Most visitors choose to stay in the downtown and York areas of Toronto, with dozens of historic hotels located in desirable areas such as the Carlton, Dundas, Yonge and York streets. Hotels with views of Lake Ontario are understandably sought after and expensive, while guest houses on the eastern side of the city provide better value, particularly around the Annex district and the vibrant gay friendly Church-Wellesley Village neighborhood. B&Bs are also extremely popular and often quite affordable in various suburbs of Toronto, although many now require a minimum stay of at least two nights.

Those wishing to stay within Toronto's Financial district will find that the Fairmont Royal York Hotel is a particularly reliable lodging option, boasting four-star accommodation and dating back to 1929. In the past, many celebrities have stayed at the Fairmont Royal York, including the likes of Sir Andrew Lloyd Webber, Cary Grant, Gene Kelly, Matt Damon, Tina Turner and even Sir Winston Churchill, amongst others.

Luxury accommodation is also available at the more expensive five-star Four Seasons Hotel. Standing within the very heart of the Yorkville area, the Four Seasons is conveniently close to the Hazleton Lane Shopping Center and the campus of the University of Toronto, where both the Varsity Arena (used for ice hockey games) and the Convocation Hall are located.