Getting Around, Toronto Travel, Transport and Car Rental 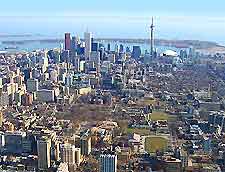 With one of the most effective and well-maintained transport systems in North America, visitors to Toronto will find the city easy to travel around, regardless of the weather. The Toronto Transit Commission (TTC) operates bus transport, subway trains and streetcars, which provide affordable travel throughout the city, eliminating the need for a car in downtown Toronto. While those who want to visit outlying areas around Toronto may choose to hire a car, convenient alternatives include train travel, coach transport and flights to other Canadian and US cities.

Address: 3111 Convair Drive, Toronto AMF, Ontario L5P 1B2, Canada, CA
Tel: +1 416 247 7678
Operating flights to destinations worldwide, Toronto Pearson International Airport is conveniently located a 45-minute drive from the center of downtown. The airport is served by most international carriers and transport options into the city from the airport are plentiful, with Airport Express and TTC buses providing regular travel.

While most visitors arrive in the city at Toronto Pearson International Airport, Toronto's City Center Airport (TCCA) is the city's second airport, offering short-haul flights to Canadian and American centers. The airport is accessible visa a short free ferry ride and is located on the Toronto Islands. 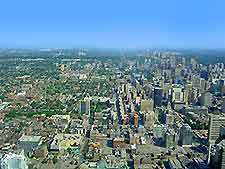 Traveling by car is a great way to see the areas surrounding Toronto, while the excellent public transport within the downtown center removes the need for a car in the heart of the city. Car rental transport offices can be found at Toronto Pearson International Airport and in downtown Toronto, while most major hotels will also be happy to arrange car hire for you. It is always best to book a vehicle in advance to avoid disappointment. Major routes leading into the city include the QEW, 404, 401, 400 and the 427, and traffic congestion can be common.

Regular buses can be used to travel nearly anywhere in the city of Toronto, making traveling from one destination to another simple, regardless of your starting point. GO Transit offers bus transport to the city's suburbs, while Greyhound coaches provide regular links with other US and Canadian cities. Alternatively, Ontario Northland and Coach Canada also offer frequent coach links to destinations countrywide, with buses departing from Toronto Coach Terminal. In addition to regular buses, the city of Toronto also operates streetcars which travel around similar routes to regular buses.

TTC operates an excellent underground subway transport system, with most parts of the city being easily accessible via the subway's three main lines, while outlying areas are connected by GO Trains services.

Toronto has excellent rail connections, both west towards Western Ontario and eastwards towards Montreal. It is also possible to travel across the prairies to Vancouver, although this service does not run daily, while regular Amtrak trains travel to New York.

There are taxis everywhere you look in downtown Toronto, making traveling by taxi idea for short hops. Longer trips can work out to be expensive, although taxis are a safe and efficient way to travel to destinations that are not situated close to a subway station or bus stop.