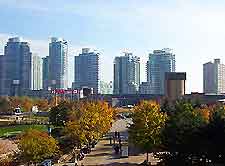 Toronto's history is one of humble beginnings, rising from a fur trade center and a safe haven for the British, to become a multicultural hodgepodge of New World seekers and a prominent North American city.

Native Americans (first the Iroquois and then the Hurons) were in the region long before white man knew of Lake Ontario. They used it as a shortcut between lakes and named it 'Tkaronto' ('trees standing in water'). French pioneers arrived on the scene in the early 1600s, quickly realizing the potential for shifting fur, and established a trading post here.


The British made an appearance at the time of the American Revolutionary War and secured vast tracts of land in the Toronto Purchase in 1787. After running the French out, the English established York and Fort York was built at the spot of (the now) downtown Toronto. The Americans destroyed the fort during the War of 1812. As payback, the British burnt down the president's residence in Washington. It was subsequently hastily whitewashed, hence its name, the 'White House'. 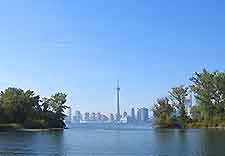 The early 1800s saw mass migration to the New World and the Toronto area, with vast numbers of Irish fleeing the Great Famine. The extending of the Erie Canal to Lake Ontario allowed for passage from New York and increased trade.

The city grew quickly, with industry, water works, gas lighting and public transportation being developed. Indeed, it grew exponentially after being incorporated into the North American railroad network. Along with the migration of various peoples came their differing cultures, making history in Toronto somewhat a cultural mix. 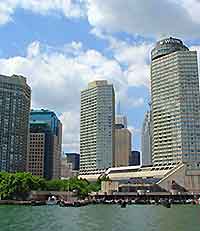 Whiskey and the 20th Century

A huge whiskey distillery was set up at the turn of the 20th century, while electric streetcars replaced horses and folk poured in from Europe at the end of the 19th century. They were mainly French, German, Italian and Jewish, followed by poorer Chinese, Russians and Poles, who settled in the area known as the Ward (now Bay Street, the financial hub today). Chinatown came about around this time - today it is centered along Dundas Street West, while Koreatown is on Yonge Street in North York.

After WWII and into the 1960s, many people moved into the city proper and it saw a huge revival to become North America's fastest-growing city, though heritage was retained in the main. The current city of Toronto was established in 1998, with the addition of York, North York, East York, Scarborough and Etobicoke.

Among the preserved historic Toronto buildings is Casa Loma, a Gothic Revival house in midtown. Built in 1911 by wealthy financier Sir Henry Pellatt, this Edwardian faux-castle is today a museum-type attraction complete with towers and secret passages. Another popular museum detailing the history of Toronto is the Royal Ontario Museum, which features Native American and Egyptian artifacts.

With its impressive makeup of myriad communities from around the world, the city puts on numerous ethnic festivals throughout the year. In 2009, Toronto saw big celebrations as the city marked 175 years since its founding in 1834.