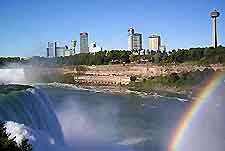 Famous through Canada and the world, the Niagara Falls are a natural wonder, attracting around five million tourists each year. Responsible for much of the area's wealth and tourism, the city of Niagara Falls actively promotes this stunning backdrop.

The Niagara Falls themselves roar over a 52-meter / 170-foot cliff and many different ways of viewing the Falls are available, including boats, towers, cable cars, helicopters and even tunnels in the rockface. Located around 3 miles / 2 km up river, central Niagara Falls has developed to cater for this tourist-related market and offers a wealth of entertainment and excitement, which is available day and night.

The Niagara Falls area is split into a number of distinct locations and regions, including the Downtown District, an old, commercial area where locals spend much of their time, based around Queen Street and Victoria Avenue; and the more tourist-related Entertainment District, a glitzy region, with many outstanding tourist attractions, museums and night spots based around Clifton Hill. Nearby, Niagara on the Lake is a small and attractive village within easy reach of Niagara Falls, and a popular excursion from the city. 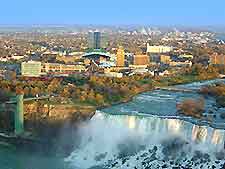 Although the city of Niagara Falls is not particularly big, the hotels are plentiful and generally reasonably priced, with rates being cheapest outside of the summer season. Hotels in Niagara Falls are particularly popular close to the Falls themselves, within the downtown area. Bed and breakfasts are always a good option and many stand along the River Road and in the suburbs. Hostels are also available in Niagara Falls and popular with backpackers, being located along Cataract Street and Zimmerman Street. More information about Niagara Falls Hotels.

The main tourist information outlets in the area include Table Rock Center next to the Horseshoe Falls, the Niagara Falls Visitors and Convention Bureau on Stanley Avenue, and the Ontario Travel Information Center also on Stanley Avenue, between the Rainbow Bridge and Queen Elizabeth Way. Offering a range of tourism advice, leaflets, maps and travel advice, these tourist information centers also assist with hotel reservations and tour bookings. 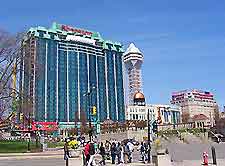 Notable landmarks and monuments in the Niagara Falls area include Skylon Tower - the highest building in the city of Niagara Falls, famous for its revolving restaurant; Konica Minolta Tower - a striking and eye-catching tall building in central Niagara Falls, dating back to the 1960s; and Old Fort Erie - a notable military site heavily used during the War of 1812, with reenactments of battles and seasonal events. More information about Niagara Falls Tourist Attractions and Niagara Falls Landmarks and Monuments.

Some of the most popular museums and art galleries in Niagara Falls include Ripley's Believe It Or Not! Museum - full of amazing exhibits and unbelievable items, together with a popular 4D moving theater; Daredevil Adventure Museum - celebrating area's the world-famous Falls, with a modern IMAX Theater and information about the many individuals who have plunged over the waterfalls in barrels; Guinness World of Records Museum - a major tourist attraction, with displays and information about many staggering record-breaking feats; Louis Tussaud's Waxworks - with over 200 realistic waxwork models of famous celebrities and politicians; Movieland Museum of Stars - full of cinematic historic and displays about many old Hollywood blockbusters; and the Niagara Falls Art Gallery - celebrating the life and popular artist William Kurele, with paintings and year-round temporary exhibitions. More information about Niagara Falls Museums and Niagara Falls Art Galleries.

Tourist attractions located nearby Niagara Falls include Buffalo - a major city attraction in the nearby state of New York, just a short drive from Niagara Falls, with a population of around 300,000 and many must-see tourist sights; Queenston Heights Park - known locally as the 'birthplace of Canada', featuring two large pavilions, sports facilities, playgrounds, a restaurant and Brock's Monument, an outstanding stone structure; Historic Fort George - situated in the Niagara on the Lake village, with trails, restored buildings and local artifacts, a popular excursion for tourists in the Niagara Falls area; and Old Fort Niagara - standing in Youngstown, near to Niagara Falls, a notable fortified New York State Historic Site, with ancient buildings and seasonal battle reenactments. More information about Niagara Falls Attractions Nearby.