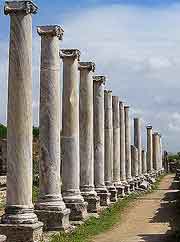 Antalya Airport is a busy air facility that serves one of Turkey's most popular holiday destinations. It now ranks amongst the largest and busiest hubs in the south-western pocket of Turkey. More than 25 million passengers are catered for at this airport each year, most of whom come for the surf, sun and fun of Antalya.

There are two terminals serving international passengers, as well as one domestic terminal. Three runways are in operation, with two measuring some 3,400 metres / 11,150 feet in length. The first international terminal was built in 1996, while the second was added recently. Some of the destinations served by airlines using the airport include Cologne, Helsinki, Paris, Sofia and Rome.

Freebird Airlines, Pegasus Airlines, Sky Airlines and Turkish Airlines all use Antalya Airport as their principal hub. The complex receives seasonal, charter and scheduled flights year-round. It stands to the east of the city's downtown district and close to the suburbs of Guzeloba, Calkaya and Kemeragzi, with buses and taxis transporting passengers to nearby locations.

Address: Highway D400, Antalya, Turkey
Tel: +90 242 330 3600
Passengers can easily reach downtown Antalya, which is located 10 km / 6 miles from the airport. Drivers can take the D400 as far as the Aspendos Boulevard, which connects with downtown Antalya, one of the country's premier holiday spots.

The airport is located close to the centre of Antalya, meaning that catching a taxi or driving oneself into the city are both equally good options. Take the D400 from the airport to the eastern periphery of the city. Turn onto the Aspendos Boulevard to reach the heart of Antalya. Of note, taxis are available 24 hours and operate from all terminals.

Buses are cheaper than taxis and run between 06:10 and 01:10 every day. These regular buses generally take about 20 minutes to reach downtown Antalya, while select airlines provide buses for passengers. Havas, a popular coach service to the city, runs via the D400 and leaves from the Domestic Terminal.