The Finnish capital of Helsinki is to be found next to the Gulf of Finland and was established here in the middle of the 16th century. Deservedly ranked recently as the 'European Capital of Culture', Helsinki is the most cosmopolitan, exciting and captivating city in Finland and is famed for its plentiful parklands and green spaces.

Helsinki is made up of a series of peninsulas and large bays, while the city centre offers a symmetry of organised streets and straight boulevards. Visit the Kamppi district for its many wonderful wooden buildings from the past, the Kallio area for its captivating relaxed atmosphere and endless eateries, and the neighbourhood of Töölönlahti (Töölö) for its coastal scenery. 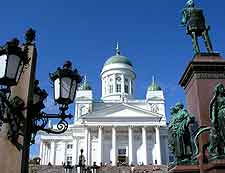 The countless pretty waterways around the Punavuori district are often of interest to tourists, while the market square within Kauppatori is always bustling with crowds and lies at the eastern end of the Esplanadi, next to the Baltic Sea and the city's ferry terminal.

Close by and within the Kluuvi area, both the Helsinki City Tourist and Convention Bureau and the Huonevaraustoimisto (Hotel Booking Centre) are worth visiting if you are in this region, offering tourism advice, in-depth tourist information, city maps and various services. 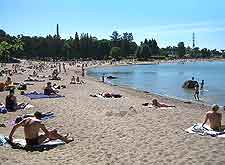 Taking a guided bus tour of the city is a good way to learn more about Helsinki and gain your bearings a little, passing a number of the main attractions en route. In particular, you can expect to see the Olympic Stadium (Olympiastadion), where the summer Olympic Games of 1952 were staged and today, both athletics events and enormous rock concerts take place. The Linnanmäki Amusement Park is another famous sight that you will pass and is one of Finland's biggest theme parks, being home to an extremely famous wooden roller coaster, the Vuoristorata. For families, a visit to the rocky Korkeasaari Island is time well spent and here you can enjoy a day out at Helsinki Zoo, where the snow leopards are a particular highlight for many. More information about Helsinki Tourist Attractions. 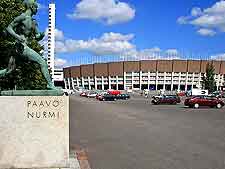 However, if it is historic landmarks and grandeur that you seek, then Helsinki is sure to please and features such gems as the Tuomiokirkko Cathedral, the Senate Building (Valtioneuvoston Linna) and also the Greek-inspired Parliament Building (Eduskuntatalo), which was designed and built in the 1920s on the Arkadianmäki Hill, following a competition for budding architects. Presiding over the central Market Square, the pale blue exterior of Helsinki Town Hall (Kaupungintalo) is hard to miss, while even the Railway Station (Rautatieasema) is a relatively grand building in its own right and easy to spot with its tall clock tower. More information about Helsinki Landmarks. 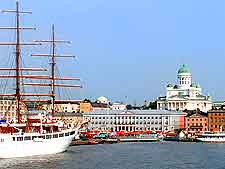 If you are interested in Helsinki's past, then its numerous museums offer a wealth of historical information and other interesting exhibits, such as the Ehrensvärd Museum, which celebrates the island of Suomenlinna. For the very best in Finnish design, pay a visit to the Design Forum Finland, while for a taste of the public transport from way back, the Tram Museum (Raitioliikennemuseo) may be of interest and is actually part of the Helsinki City Museum (Helsingin Kaupunginmuseo). If art is more your thing, then the Cygnaeus Art Gallery (Cygnaeuksen Galleria), Museum of Finnish Art (Ateneumin Taidemuseo) and Helsinki City Art Museum (Helsingin Kaupungin Taidemuseo) will surely please. More information about Helsinki Museums and Helsinki Art Galleries.

Well placed to explore this part of Finland, you don't have to travel far outside of the city to encounter some interesting sights and tourist attractions. The Helsinki Metropolitan Area comprises a number of adjacent towns, such as Tuusula and Espoo, where the largest water park in Scandinavia resides, the Vesipuisto Serena. Also part of the overall Helsinki region is Vantaa, home of the acclaimed Tiedekeskus Heureka Science Centre and the Aquarium Castle (Akvaariolinna), while during the snowy winter months of Finland, the Vihti Ski Centre in nearby Ojakkala quickly begins to fill up with visitors from city. More information about Helsinki Attractions Nearby. 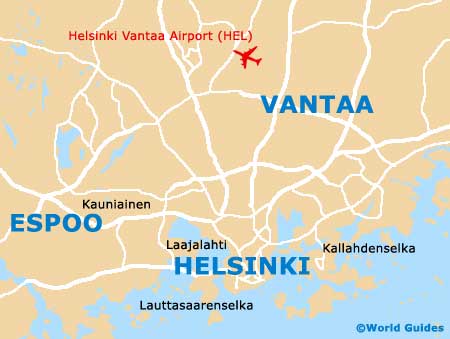