Antalya Weather, When to Go and Climate Information 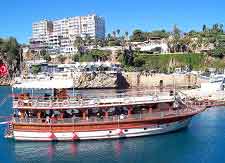 The climate of Antalya remains fairly mild throughout the year, meaning that the city enjoys a steady flow of visitors outside of the hot summer months. Antalya is certainly best known for its sunny weather and high summer temperatures, which regularly rise above 30°C / 86°F between June and September, and at times reach 35°C / 95°F.

However, the high levels of humidity can make the summer climate feel even hotter, together with the noticeable lack of northerly winds. Therefore many Antalya sightseers favour an early start to the day, cooling down in the sea or water parks later on. 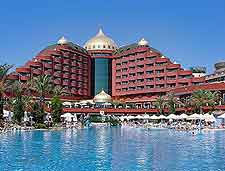 During the fine summer weather, the waters around Antalya quickly warm up and tend to stay around 28°C / 82°F, and so are very inviting to swimmers, while those who prefer to worship the Turkish sun can simply lie back on the beach.

The climate begins to cool down slowly, from October onwards, and as the winter months approach, the likelihood of rainy weather increases. However, once the rainy weather season arrives in Antalya, anytime from November to March, it generally only lasts a matter of weeks and is interspersed with fine days and blue skies. December, January and February are always the coldest months in Antalya, although with daytime temperatures averaging 15°C / 59°F or 16°C / 61°F, and nights usually remaining well above freezing, snow is virtually unheard of.