Famed for its extremely continental character and multicultural appeal, the Swedish city of Malmo cannot help but be influenced by Denmark's nearby capital of Copenhagen, which lies across the water and is linked by the spectacular Oresund Bridge, Europe's longest bridge combining both road and rail. The skyline of Malmo is particularly interesting and rather extraordinary, since the city seems to be filled with some rather unusual structures, such as the hard-to-miss Turning Torso tower, which twists its way high into the sky.

The very heart of Malmo is based around the Old Town district, which is known as the Gamla Staden and surrounded by a scenic canal. Within Malmo's Gamla Stan are three notable squares, the Big Square (Stortorget), the Little Square (Lilla Torg) and also Gustav Adolfs Square (Gustav Adolfs Torg), which are also extremely close to each other and surrounded by interesting shops and appealing restaurants. For the latest in the way of tourism, check out the tourist information office on the Skanegarden on the Stortorget, with a further outlet at the main railway station (Centralstationen), offering information about the Scania (Skane) province and Sweden as a whole. 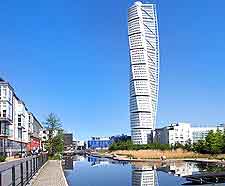 One of the most famous sights in the city is Malmo Castle, which is known to the locals as the Malmöhus Slott and one tourist attraction not to miss, dating from the 15th century. The City Hall (Radhuset) is also an extremely important building and presides over the Stortorget. Something quite different and extremely eye-catching in Malmo is the Turning Torso, the tallest of all the buildings in Scandinavia, and probably the most bizarre. In the summer, don't miss spending a day on the sandy Ribersborgs beach, often referred to as the 'Swedish Riviera'. More information about Malmo Tourist Attractions and Landmarks.

Those visiting the Malmöhus Slott will find a series of different museums which cover various subjects and combine to make the extremely popular Malmo Museer, which is full of information about the city's medieval past. There is also plenty of historical and cultural information on offer at the neighbouring Stadsmuseum. For art lovers everywhere, the Malmo Konstmuseum, Konsthall and Rooseum offer everything from early Nordic pieces to contemporary paintings by modern artists. More information about Malmo Museums and Art Galleries. 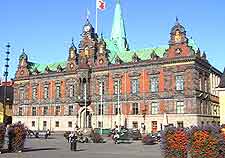 Malmo is well placed to explore Scania and other areas of Sweden, with many tourists choosing to enjoy day trips outside of the city. Literally millions of travellers pass through the city of Helsingborg each year, as they head to Denmark, with highlights here including a number of Gothic-style buildings and the Tropikariet Zoo, while the city is so nearby that it is almost considered to be a suburb of Malmo. Lund is home to an exceptional Romanesque-style cathedral (Domkyrkan), complete with animated clock. Also close by are both Ystad and Trelleborg, the latter of which is home to a bustling port. More information about Malmo Attractions Nearby.