Getting Around, Menorca Travel, Transport and Car Rental 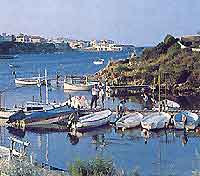 Much of the transportation available on the island is very much centred around its capital Mao (Mahon), which is situated on the south-eastern side of Menorca. This is where the airport is located, along with many of the principal car rental agencies and other travel opportunities, such as island buses.

The majority of the westerly beach resorts on Menorca are connected by buses departing from Ciutadella, while further bus transport travels between the likes of Alaior, Es Mercadal and Ferreries. Those staying in Mao can catch buses to eastern beaches and the south-eastern municipality of Sant Lluis. Many buses depart on an hourly basis and are extremely affordable.

For shorter trips to nearby attractions around your resort, taxi transport is likely to be your best bet. There are usually plenty of strategically placed taxi ranks, often being close to nightclubs and bars when the evening arrives. If you are not flying to the island's airport, then various ferries can be caught from mainland Spain, or from the neighbouring Balearic island of Mallorca.

This Balearic island is served by the busy Menorca - Mahon Airport (MAH).

Rental cars can be collected from the principal resorts and towns, as well as from Menorca Airport. Advance reservations will avoid disappointment and also ensure that you pay a competitive price. The island's main road (the ME-1) connects Mao with Ciutadella and roughly divides the island into north / south regions, running east to west. Those driving along this lengthy road will pass by both Alaior and Es Mercadal, as well as Ferreries - the island's highest town. Of note, the Spanish drive on the right-hand side of the road.

Menorca buses are all single-decker and are easy to spot, being bright orange in colour. Passengers can pay the driver as they board, while travel cards are also available for fixed periods of time. The majority of the westerly beach resorts can be reached from the centrally located plaza in Ciutadella, while further buses depart from Alaior, Ferreries and Mao, serving the easterly resorts. From Mao, TMSA (La Empresa Transportes Menorca) bus transport departs from the Placa de s'Esplanada.

Scooters are extremely cheap and popular, suiting those wishing to travel to the more distant beaches on a budget. Those with a scooter or a motorcycle will find that they are perfect for the narrow roads that cars may find more difficult to access.

Taxis are hugely popular in Menorca, with those in Mao providing an especially convenient way to reach Es Castell, Fornells, Platja de Punta Prima, S'Algar, Sant Luis, Santa Galdana and Trebeluger, although for long journeys, they can be a little expensive. Night-time surcharges are usually applicable.

If you intend to take your own car to Menorca, it will be necessary to use a ferry to travel to the island. There are regular services that sail between large towns on the Spanish mainland, as well as the harbours of Mallorca, Menorca and Ibiza.