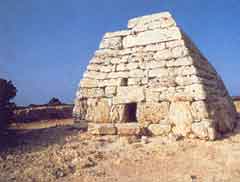 Most holiday makers come to Menorca for a summer vacation, enjoying the sunshine, sea and sand on offer. However, if you have a little time to spare and are intrigued by the island's history, then you will certainly find it more than rewarding to search out some of the oldest and most interesting landmarks.

There are many old sights and monuments based within Mao, such as both the Placa Esplanada and the Teatre Principal, the latter of which is a historic Opera House built in 1929 and boasting exquisite decor, being central to culture in Menorca. In the town of Ciutadella, the Castell de Sant Nicolau stands out, while located to the west of Mao, the complex system of prehistoric caves known as Cales Coves may not be the easiest landmark to reach, but the journey here is particularly scenic and the setting is really quite serene.

Address: Mao, Menorca, Spain
The Placa Esplanada in Mao is the biggest square in the city and was once used as a military parade ground. With attractive flower beds and shaded by tall, pine trees, the plaza is a popular landmark in Menorca and provides a convenient place to meet up. Highlights include homemade ice creams, swings for children, historic architecture, numerous bars, cafés and restaurants, and a regular market held on Tuesday and Saturday mornings.

Address: Placa Almirall Farragut, Ciutadella, Menorca, Spain
This grand 17th-century castle was originally built as a watch tower, to protect Menorca's nearby harbour. With a working drawbridge and excellent views of the sea, this fortification provides a superb vantage point to fully enjoy the beautiful sunsets over the harbour. There are also various exhibitions staged at the castle throughout the year. 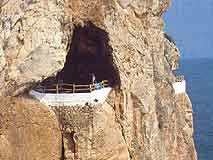 Address: West of Mao, Menorca, Spain
Cales Coves is situated 11 km / 7 miles to the west of Mao and is easy to reach by bus. This historic monument has become a popular tourist attraction and is best viewed from the sea, where the numerous chambers can be fully appreciated from a distance. A stony pathway leads to the caves themselves, which were once used as burial chambers during the Talayotic period and later became a major destination for pagan rituals on the island. 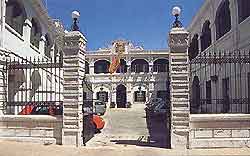 Address: Carrer Isabel II, Mao, Menorca, Spain
The Military Governor's House is without doubt one of the most splendid buildings in the whole of Mao and is still used today by the army. This grand palace was built in the mid 18th century and although it can only be viewed from the outside, it is well worth visiting.