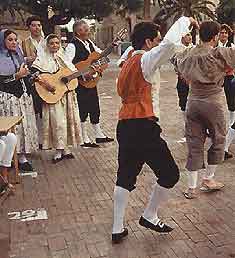 The Mediterranean island of Menorca has been known for its established cultural scene for many centuries, with religious ceremonies and processions, annual Spanish-themed festivals and many other seasonal things to do, a number of which date all the way back to the 14th century.

Popular events on Menorca include a plethora of summer fiestas, various concerts and countless beach parties, with Mahon's annual music festival standing out in particular, along with its opera weeks each May and December.

Lovers of jazz and blues should consider holidaying on the island in late April or early May, when the Menorcan Jazz Fest is in full swing, while further jazz and live music events are often staged within Mahon's Es Freginal Park. In Ciutadella, the Capella Davidica features additional summertime concerts, along with the Festes de Sant Joan.

There are approximately fourteen accepted public holidays in Spain, which can be acknowledged on either a local or national basis. Listed below are those dates observed in Menorca.

A variety of occasions are detailed here to illustrate what Menorca and nearby islands have to offer. However, the already busy social calendar of the Balearics is continually being added to.