One of the most popular of the Balearic Islands, Menorca is certainly less developed and touristy than Mallorca and Ibiza, ranking as a UNESCO Biosphere Reserve and championing some admirable conservation programs. Visitors to Menorca will find many idyllic beaches and untouched stretches of coastline, although there are also plenty of official holiday resorts if you prefer something a little livelier.

As the capital of Menorca, Mao (Mahon) is where many people choose to based themselves and there are plenty of hotels around this city. Mao resides on the south-eastern side of the island, being home to a busy seaport and well connected to both mainland Spain and neighbouring Mallorca by regular ferries.

Mao is well connected to the rest of the island, with the ME1 highway running through the centre of the island and connecting Menorca's number two town, Ciutadella. There are a series of secondary roads which link all of the principal beaches, towns, villages and resorts.

Maps are a sensible move if you are intending to drive around the island. Here are some useful distances and directions from Mao. 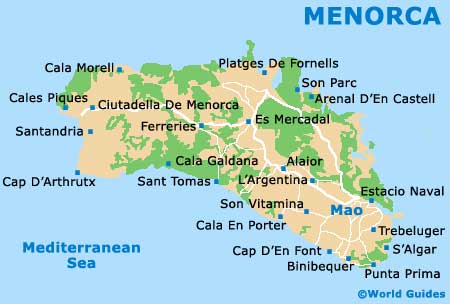