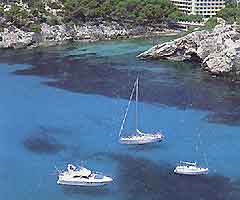 Whilst it is true to say that Menorca does come with less beaches than the other Balearics, namely Ibiza and Mallorca, those on the island are generally far less developed and quieter.

A number of Menorca's most noteworthy beaches are situated along both the eastern and southern coastline, with some equally appealing beaches also being based to the west, around Santa Galdana, Son Xoriguer and Cala en Bosch. If you are prepared to travel a little, you may well be able to find a secluded cove all to yourself.

During the busy summer season, the main beaches on the island of Menorca often come with lifeguards, with designated swimming areas clearly marked by brightly coloured floating buoys. Whilst you can swim outside of these zones, it is recommended that less experienced swimmers stay within these confines. 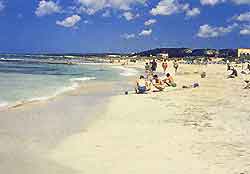 The longest beach in Menorca, Son Bou is around 3 km / 2 miles long. With fine sand and calm waters, this coastal expanse is a popular place for sunbathing and swimming. At the eastern end of the Son Bou are the ruins of an early Christian church.

The golden beach of Els Canutells is situated at the end of a narrow sheltered bay that cuts deep into the island of Menorca. Els Canutells beach is located on the eastern part of the bay and is an excellent place for swimming in the sea.

Located between Punta Prima and Cap d'En Font, Cala Binisafuller is around 40 metres / 130 feet in length. This beach is mainly frequented by Menorca tourists staying at hotels nearby.

Cala Binibeca is a particularly wide beach and is situated close to Binibeca Vell. This beach and the surrounding area remain fairly undeveloped, while there is also a car park and restaurant nearby.

Cala Alcaufar is situated on the south-east coast of the island and runs along the bay.

This is the most southerly of Menorca's beaches and also one of the most popular on the island. Punta Prima has some splendid views and overlooks nearby rocky areas.