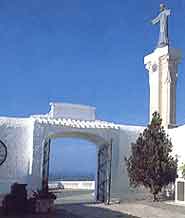 There are a number of beautiful churches, cathedrals and religious buildings to be found in this historic island of Menorca.

Address: Placa de Monesir, Mao, Menorca, Spain
Menorca's Sant Francesc Church has a light-coloured Baroque facade and is situated at the end of Carrer Isabel II. Highlights include a an imposing Gothic altar, an octagonal chapel, detailed Baroque decorations and a nearby monsatery.
Open hours: Monday to Saturday - 18:30, Sunday - 10:00 and 19:30

Address: Placa de la Catedral, Ciutadella, Menorca, Spain
Menorca's impressive 13th-century cathedral, located in the island town of Ciutadella, was built on the site of an ancient mosque. Ciutadella Cathedral was badly damaged by fire in the mid-16th century and was remodelled shortly after. The cathedral features some detailed architecture, stone carvings of strange, mythical creatures and a Neo-Gothic canopy that hangs high above the main altar.

Address: Santa Clara, Ciutadella, Menorca, Spain
Founded in 1287, Menorca's original Santa Clara Church was destroyed during the Turkish raid in 1558 and was rebuilt many years later, during the 17th century. It was badly damaged once more in the Spanish Civil War and then restored further. Santa Clara Church highlights include an intricate wood carving depicting the 'Adoration of Shepherds', which was stolen may years ago and then recovered. A small group of nuns still actually live in this attractive and historic Menorca church.

Address: Carre de Vassollo, Menorca, Spain
Menorca's 17th-century Sant Antoni Church was badly pillaged during the Spanish Civil War and was closed for many years whilst being restored. The church is once again a popular place for worship in Menorca and is also part of many cultural events on the island.
Open hours: Monday to Saturday - 20:00, Sunday - 10:30