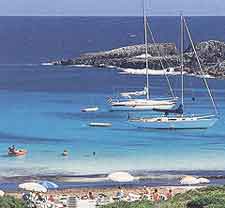 The museums of Menorca provide something different to do, away from the beaches and more mainstream attractions. Located in Mao and just a short walk northwards from the tourist office on the Carrer des Form, the Museu de Menorca ranks amongst the best museums and contains an extensive permanent collection of island history, including various ancient Roman treasures and modern-day Spanish paintings.

Situated on the north-westerly side of Menorca, the charming town of Ciutadella comes with a couple of interesting museums. Housed within the Eglesia dels Socors (a 17th-century baroque church on the Carrer dels Socors) is the Museo Diocesa (Diocese), while the Museu Municipal de Ciutadella is to be found on the Bastio de sa Font and is known on the island for its prehistoric and medieval relics.

Address: Placa de Sant Francesc, Mao, Menorca, Spain
Tel: +34 971 350 955
The Museu de Menorca is situated in Mao, in the former cloister of a beautiful 15th-century Franciscan monastery, which was abandoned in 1835 after expropriation plans. Over the following years, the monastery was used for a number of different purposes, with these including both a school and a library. Highlights include numerous works of art, archaeological relics, items dating back to prehistoric times, and artefacts from Roman, Byzantine, Arabic, Muslim and Talayotic periods on the island. The fascinating exhibits provide a real insight into the island's history.
Open hours: Tuesday to Saturday 10:00 to 14:00 and 18:30 to 20:30, Sunday - 10:00 to 14:00
Admission: charge

Address: Carrer dels Socors, Ciutadella, Menorca, Spain
Tel: +34 971 481 297
The Diocese Museum is situated in the town of Ciutadella and is housed in a former Augustinian convent. With numerous exhibits and interesting collections, including prehistoric relics, historic artefacts, bronze casting, numerous Catalonian paintings and many sacred objects, the museum is a popular attraction on the island of Menorca. Items of particular interest are the ancient and precious gold chalices and communion cups.
Open hours: Tuesday to Saturday - 10:30 to 13:30

Address: Bastio de sa Font, Ciutadella, Menorca, Spain
Tel:+34 971 380 297
Situated within Ciutadella and housed in the 17th-century town fortifications, the Museu Municipal de Ciutadella was founded in 1995. This cultural attraction displays many important collections, such as ancient artefacts from the Talayotic, Muslim and Roman periods on the island, including ceramic bowls, jugs, vases, bronze weapons and some intricate, beautiful jewellery.
Open hours: Tuesday to Saturday - 10:00 to 14:00
Admission: charge