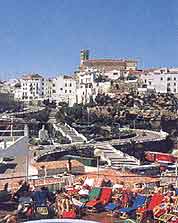 The Balearic islands provide excellent shopping, which is so typical of Spain. The island of Menorca is no exception and is full of many popular shops and markets, selling a wide range of merchandise.

The numerous beachfront shops stay open until late at night and during the high season, most shops in Menorca open seven days a week. Provincial towns and villages do not usually have such regular opening hours and are not really aimed at tourists in Menorca.


Markets in Menorca provide the ideal place to purchase some of the freshest food and produce in the city, which is usually very reasonably priced. The markets offer a wonderful opportunity to try local specialities in Menorca. Most markets in and around Menorca tend to sell a little of everything, although Menorca does have a few specialist markets. Menorca's bustling markets provide a fun way to shop, for both experienced and novice bargain hunters alike.

Menorca has a large number of small, interesting shops that offer a wide range of souvenirs, and also many larger stores. Shops in Menorca can be found all over the island, but in particular in the historic areas of Menorca and also in tourist centres, near to the beaches and harbours. There are also shopping centres and numerous shops on the beachfront, selling espadrilles (traditional footwear in Menorca), beach mats and sun-block cream.

Menorca offers a number of interesting food products specific to the region, such as delicious 'ensaimada' pastry, which is beautifully presented in a box, gourmet spicy sausages, olives prepared in many different ways and strings of dried peppers. Wine in the Balearic islands is well worth trying and nearby Mallorca is well-known for producing some of the best wine in the whole region and a popular wine festival is held every September in Mallorca. Food and wine is widely available in shops, well-stocked supermarkets and at many of Menorca's popular markets, where some of the island's delicacies can also be sampled.

Markets have become an important part of life in Menorca and are held at weekly intervals, mainly in the provincial towns and villages. These busy markets are full of local atmosphere and serve both the local population of Menorca and also offer many goods and souvenirs for tourists and visitors to the island. Some of the markets in Menorca sell fruit, vegetables and local produce, besides numerous domestic items, clothes, jewellery and leather goods. Markets tend to start in the mornings and end later, some time in the afternoon. Some of the Menorca markets are held every day during the island's high season.