The lively holiday resort of Marbella lies on the southern Andalucian coastline of Spain, directly to the west of Fuengirola and close to Malaga, where it is presided over by the Sierra Blanca. Formerly a small and underwhelming fishing town with many whitewashed buildings, the Marbella of today ranks amongst the most popular beach resorts within the Spanish Costa del Sol.

Marbella is home to a population of roughly 125,000 people and is relatively easy to navigate, with the N-340 functioning as a major artery and known as both the Avenida Ricardo Soriano and the Avenida Ramon y Cajal. The historic Old Town is provides a pleasant contrast to the beach hotels and is very much based around the Plaza de los Naranjos, where maps can be picked up at the local tourist office.

The Plaza de los Naranjos is dominated by the 16th-century town hall, while close by and to the west of the Plaza de la Victoria, a cluster of Spanish restaurants reside. To the east is the Plaza de la Iglesia, home to the Iglesia de la Encarnacion. Consider heading in an easterly direction and you will reach the Museo del Grabado Espanol Contemporáneo. 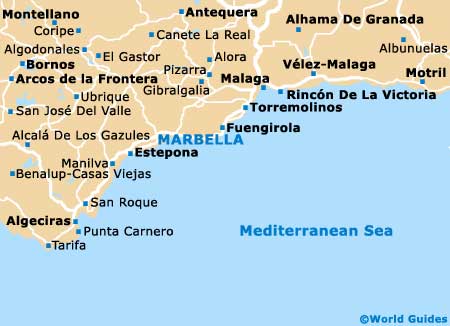