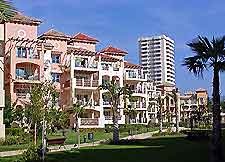 One of the best resorts along Spain's famous Costa del Sol, Marbella is made up of several distinct neighbourhoods and locations, each of which offers its own unique character. Much of life in Marbella is centered around the Old Town district, which features many of Marbella's most historic buildings and the notable Plaza de los Naranjos.

Downtown Marbella is a particularly busy part of the city, known for its shopping districts, restaurants and popular Tapas bars, which are particularly concentrated around the Avenida Ricardo Soriano. Also worth a mention, the Puerto Banús is often considered a suburb of Marbella and stands just a few miles to the west, close to both San Pedro de Alcántara and Estepona. To the east of Marbella, nearby Fuengirola is a popular place to visit, together with Spain's famous resorts of Torremolinos and Malaga - which is just 58 km / 36 miles from Marbella. Here are Marbella's main districts, neighborhoods and locations. 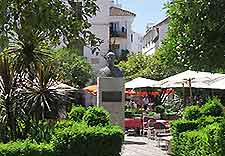 Much of Marbella is an attractive resort, featuring appealing and sympathetic architecture, with the greatest part of the area's character being located in the historic Old Town district. Here you will find that much of life is centred around Marbella's scenic Plaza de los Naranjos. The Old Town district is still party surrounded by an old wall and is set back from the newer part of the resort, being hidden away from the main road.

Marbella's original quarter around which the area has grown considerably, much of this neighbourhood has been renovated and refreshed, with speciality stores, restaurants and boutiques gradually appearing, although bags of traditional character remains, particularly around the squares. Here you will find small cobblestone alleyways lined with white-washed houses and views of the nearby Ronda mountain range.

Downtown Marbella is based around the busy Avenida Ricardo Soriano, which is the city's main thoroughfare. The notable Ricardo Soriano Avenue is named after a famous local who originated from Salamanca and is lined with an endless selection of hotels, restaurants, Tapas bars, shops and bazaars. The city's main artery stretches for miles and leads into the heart of Marbella, with numerous superb beaches nearby, together with the Paseo Maritimo seafront promenade. 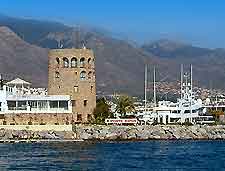 Almost a suburb of Marbella, the Puerto Banús can be found around 6 km / 4 miles to the west of the resort and is one of the Costa del Sol's most important harbours. This region is known as a popular haunt of wealthy holiday makers and celebrities, who often stay in nearby villas, tucked away in scenic hillsides, with superb views across the Puerto Banús district. The marina itself is a large complex, comprising a number of shops, bars, seafood restaurants and a casino.

Many large and impressive yachts are moored nearby, with two piers and almost 1,000 spaces close to the Calle Ribera, which edges the waterfront. Puerto Banús is always popular with visitors to Marbella and its award-winning tourist facilities have much to offer. Named after José Banús, famous for his love of New Andalusia, the Puerto Banús district is also known for its lively nightlife and cocktail bars, many of which often stay open well after midnight.

Just 13 km / 8 miles to the west of Marbella and close to the Puerto Banús district, San Pedro de Alcántara is a busy town, with a population of more than 30,000. Near to both Nueva Alcántara and Torre De La Bóvedas, the coastline is within easy reach of San Pedro de Alcántara and offers a number of popular beaches, including Playa de Guadalmina - a blue-flag beach home to over 1,500 meters / 4,920 feet on golden sand, with an array of water sports available, including both surfing and windsurfing.

San Pedro de Alcántara is often considered part of Marbella and contains a rich Roman heritage, with a number of notable remains and ruins, together with an appealing redeveloped centre. Here you will find a good selection of inexpensive accommodation options, together with shops, bars and restaurants serving traditional Spanish cuisine and freshly caught seafood.

An enchanting village around 32 km / 20 miles to the west of Marbella, Estepona is often treated as a suburb of Marbella and although discovered fairly recently by the tourist industry, Estepona still retains much of its small-village feel. With a long promenade stretching along the waterfront - the Avenida de Espana, Estepona is home to a number of white sandy beaches, fish restaurants with superb coastal views, and a good selection of speciality stores and gift shops.

Much of life in Estepona is centered around the main Historic District, where you will find banks, bakeries, local markets and the Town Hall (Ayuntamiento de Estepona). Both locals and tourists in Marbella visit the Estepona area to enjoy the scenery, attractions, golf courses and nearby parks.