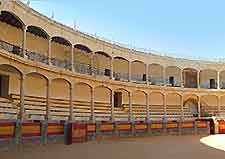 A major tourist destination offering a wealth of attractions for its visitors, Marbella also features an impressive calendar of events, with many prominent festivals taking place throughout the year. Popular celebrations in Marbella include the February carnival, Holy Week around Easter time, and the San Bernabé Fiesta and Summer Fair each June.

Also, each November, the Fiesta del Tostón (Day of Toston) is held in Marbella, a religious festival which includes many different events and plenty of parties. Close to Marbella, further annual festivities can be found in both Malaga and Torremolinos.