Marbella Weather, When to Go and Climate Information 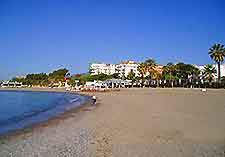 Marbella stands between the coastline and the Sierra Blanca mountains, enjoying an appealing micro-climate, with plenty of sunny weather. The climate and weather in Marbella is extremely mild, with temperatures averaging around 19°C / 66°F year-round.

Much of central Marbella has been greatly developed and the cluster of high-rise buildings store heat during the sunniest weather, which often means that this area of Marbella is a degree or two warmer the coastal region. Marbella boasts an average of around 320 days of sunshine per year, making this a major tourist destination and one of the most popular resort cities in Spain. 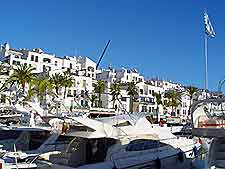 With fewer than 50 days of rainy weather each year, Marbella is known for its dry climate and springtime is no exception. As summer approaches, the temperatures begin to rise, with average temperatures in February and March hovering around 17°C / 62°F, compared to highs of 22°C / 72°F in late April. Easterly winds can be quite refreshing and cooling on Marbella's hottest spring days.

Known for its constant climate and consistently pleasant weather, summer temperatures in Marbella are rarely extreme. The summer season in Marbella is long and stretches from late May to the end of September, with summer temperatures averaging around 26°C / 79°F. July and August tend to feature the hottest, sunniest weather in Marbella, which can result in highs of up to 30°C / 86°F. Summer in Marbella is beach time, with sunbathing and swimming being the order of the day, and al fresco eating and drinking late into the night. Warm sunny weather is usually followed by mild evening temperatures and jackets are rarely needed at this time of the year.

Across the bay the winds begin to become stronger, although the autumn weather and climate in Marbella remains pleasant, with calm waters and plenty of sunshine. By late October / early November, temperatures start to feel cooler, particularly in the evenings and late at night. Temperatures during October average around 23°C / 73°F.

Sheltered and protected by the peaks of the Sierra Blanca mountain range, the winter weather and climate in Marbella is generally extremely mild, with only light clothing necessary during most winter days. Not only are Marbella's winter months quite warm but they are also fairly dry, featuring infrequent rainy weather and few overcast days. With average temperatures of around 17°C / 63°F between December to February, January tends to be Marbella's coldest month, although temperatures rarely fall below 15°C / 59°F.