Getting Around, Lodz Travel, Transport and Car Rental

The public transport system in Lodz is operated by the Miejskie Przedsiebiorstwo Komunikacyjne and includes a mixture of trams and buses, both of which share the same tickets and are a cheap way to travel around this large Polish city. Worth noting, tickets are validated as you board your transport and remain valid for a specific period of time, during which they can be used for unlimited travel on bus and tram lines all over Lodz.

Bicycle rickshaws are always a fun mode of transportation in Lodz and these regularly travel all along the Ulica Piotrkowska, for just a small charge. Rickshaws in Lodz are generally slightly more expensive by night and most drivers will be happy to transport passengers to other parts of the city, away from the Ulica Piotrkowska. 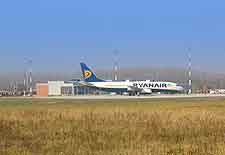 Address: Ulica Generala Stanislawa Maczka 35, Lodz, 94-328, Poland
Tel: +48 42 683 52 10
The Lodz Wladyslaw Reymont Airport is an important regional airport in the centre of Poland and can be found some 6 km / 4 miles to the south-west of the city. The main airlines at the airport include Centralwings, Ryanair and Volareweb, with the most popular routes include Dublin, London and Nottingham, along with regular flights into Warsaw, which is particularly useful for those with onward flights. 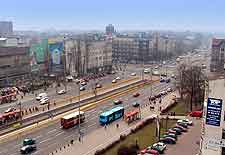 Well suited to those choosing to hire a car as their preferred mode of transport, Lodz is close to many large and appealing Polish cities and towns. The E75 links Gdansk and Katowice, while the E30 runs to Poznan and the S8 expressway connects nearby Wroclaw. 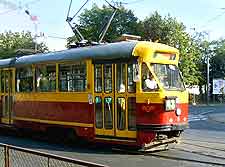 The Dworzec Centralny PKS is the central bus station in Lodz and is conveniently situated alongside the Lodz Fabryczna railway station. Many daily buses travel to and from Plock (three hours) and Warsaw (two and a half hours), while buses also run to Kielce and Radom, although less frequently. Polski Express bus transport is also available in Lodz and popular routes include Gdansk (just over six hours), Krakow (six hours) and Warsaw Airport (two and a half hours). Lodz is also home to an extremely historic tram network, which dates back to the latter part of the 19th century and is amongst Europe's longest, connecting Ozorków and Chocianowice.

The area two train stations within the city itself. The Lodz Fabryczna is the main station and is located on the Plac Salacinskiego, close to the Ulica Piotrkowska and the Ulica Piotrkowska. Trains regularly travel from the Lodz Fabryczna to Krakow (three and a half hours) and Warsaw (almost two hours). The second station in the city is the Lodz Kaliska can be found on the western side of the city, on the Al Unii Lubelskiej and offers speedy rail transport to Lowicz (just under two hours), Poznan (three and a half hours) and Wroclaw (four hours), while further trains travel to Bydgoszcz, Gdansk, Kalisz and Torun.

Taxi transport in Lodz is always extremely popular with visitors to the city, since by Western stands, they are relatively cheap. However, do always make sure that the taxis clearly display an actual sign of the top of the vehicle, and that the drivers holds the relevant permit, since this will all ensure that the taxi is a reputable one and will charge you accordingly.