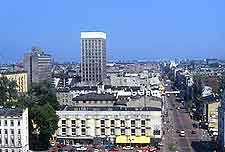 Second only in size and population to the Polish capital of Warsaw, Lodz is a huge city, full of life and some rather special Art Nouveau buildings. Although for many visitors, Lodz is really situated away from Poland's main tourist trail and not immediately associated with tourism, countless people come here to enjoy its rich movie heritage, with the city being home to leading Polish film studios and an especially famous film academy, known across Europe.

Lodz made its considerable fortune from its major textile industry and is a relatively youthful city, where no buildings are actually older than 200 years. Located on the Al Kosciuszki, the Lodz Tourist Information Centre (Centrum Informacji Turystycznej) is a good place to begin your visit, or alternatively, take a stroll along the lengthy backbone of the city, the Ulica Piotrkowska, where the most sights, restaurants and shops of any significance are either located along or just a block or two away from. 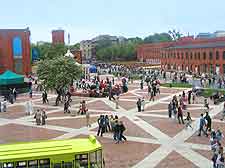 The various tourist attractions within this Polish city appeal to different kinds of visitors, with families always enjoying a day out at Lodz Zoo, or around the simply enormous Lagiewniki Park. Those more interested in the past of Lodz should take a self-guided tour around the city's Jewish Ghetto (Litzmannstadt Ghetto), which suffered terrible losses during the WWII holocaust. One of the best preserved textile mills in the city is the Priest's Mill, which today offers a glimpse into life in the city during its textile boom, while the Grand Theatre (Teatr Wielik) is well suited for opera lovers. More information about Lodz Tourist Attractions and Landmarks. 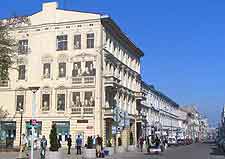 As Poland's third-largest city, Lodz rightly contains some of the country's leading museums and cultural attractions. These include the outstanding Modern Art Museum, where many striking contemporary works of art from all over Poland are displayed. For information about the city's past, both the Historical Museum of Lodz and also the Textile Museum are worth a visit, the latter of which is housed within the palace of one of the city's top Jewish textile magnates. More information about Lodz Museums and Art Galleries. 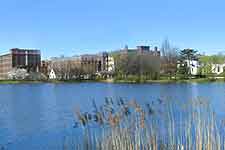 Western Mazovia is filled with interesting sights and tourists wishing to leave the city environs will find plenty of interesting towns and cities close to Lodz, including Lowicz and its central Old Town Square, which is presided over by a rather splendid cathedral. Travel a little further and you will find that Poland's two most visited cities are also within reach of Lodz, Warsaw and Krakow. Warsaw is the nearest by far and has so much to see that a simple day trip will never be long enough to properly explore and enjoy this vibrant, cosmopolitan capital. More information about Lodz Attractions Nearby.