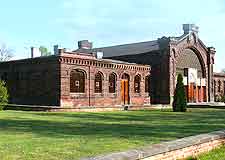 Polish tourist attractions are especially good within Lodz. Although the city is fairly flat and does not contain any lakes, there are plenty of opportunities to enjoy Polish flora and fauna, particularly within Lagiewniki Park, which is actually one of the biggest European city parks and offers a wealth of recreational attractions and leisure activities.

Lodz Zoo is also extremely popular and makes for a good day out at any time of the year, while the city's Botanical Gardens are perhaps at their best during the summer months, when the flowers are in full bloom and extremely colourful. Check out the numerous tourist attractions lining the Ulica Piotrkowska, within central Lodz, or take a stroll around the Jewish Ghetto (Litzmannstadt) and learn more about the poignant past goings-on that took place here in World War II.


Theatre-goers will usually find something of interest at one of the many theatre attractions within Lodz, such as the extremely notable Grand Theatre (Teatr Wielik) on the Plac Dabrowskiego. Also look out for the various landmarks and monuments doted around the Old Market Square, such as the Decalogue Memorial. 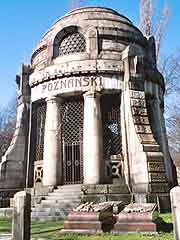 Address: Ulica Bracka 40, Lodz, Poland, PL
Tel: +48 42 656 7019
The Jewish Cemetery in Lodz was established in the early 1890s to meet to increasing need for a final resting place for the city's ever-increasing Jewish community. Covering around 99 acres / 40 hectares, the Jewish Cemetery has become the biggest European Jewish cemetery and boasts almost 70,000 tombstones, a number of which are extremely beautiful and attractions in their own right, being visited by many people each day. The Jewish Cemetery is located around 3 km / 2 miles to the north-east of the actual city centre and its entrance lies off the Ulica Zmienna.
Open hours: Sunday to Thursday - 09:00 to 17:00, Friday - 09:00 to 15:00
Admission: charge 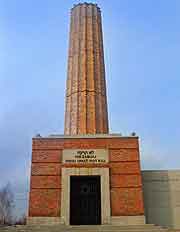 In the spring of 1940, the forceful Nazis designated than the northern side of Lodz become a Jewish ghetto and this part of the city was completely sealed off accessed only through gates. Over the next few years, more than 200,000 Polish Jews were sent to this Jewish ghetto, and when the Red Army arrived to liberate the city in 1945, sadly less than 1,000 of these Jews had actually survived their ordeal. This is therefore a very important part of the city's history and the Lodz tourist office offers a leaflet outlining a popular guided walk around this former Jewish ghetto and indicating the most notable attractions along this route. The Jewish Ghetto is often referred to as the Litzmannstadt Ghetto, since this was Germany's name for Lodz.
Open hours: daily - 24 hours
Admission: free

Address: Ulica Konstantynowska 8 / 10, Lodz, Poland, PL
Offering a good family day out, Lodz Zoo contains exotic animal attractions from many distant continents and features an especially good selection of indoor exhibits and a landscaped bird house, when interactive computer presentations explain the history of the zoo. Dating back to the late 1930s, the city's zoological gardens contain many family favourites, such as elephants, lions and tigers, polar bears, giraffes and tapirs. The enclosures reflect the growing expectations for more natural surroundings with plenty of enrichment.
Open hours: daily
Admission: charge, discounts for children 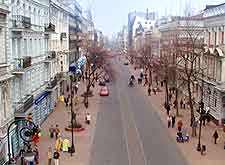 Address: Ulica Piotrkowska, Lodz, Poland, PL
The true backbone in Lodz is without doubt the Ulica Piotrkowska, which is generally pedestrianised and traffic free, and considered to be one of the finest Art Nouveau thoroughfares in the whole of Poland. Stretching for approximately 3.6 km / 2.2 miles and lined with seemingly endless attractions, the Ulica Piotrkowska is a lively place to be at any time of the day or night, and crammed full with restaurants and pubs, museums and art galleries, and busy shops and boutiques. When strolling along the beautifully restored Ulica Piotrkowska, you can expect to encounter street entertainment and buskers of all descriptions. The majority of all the attractions in Lodz can either be found along with street or just a few blocks away.
Open hours: daily - 24 hours
Admission: free

Address: Ulica Przedzalniana 72, Lodz, Poland, PL
Tel: +48 42 674 9698
This magnificent villa was built in the 1870s and was once home to the rather affluent Herbst family. Today, the Priest's Mill is open to members of the public, who will find that the main tourist attractions include many historical artefacts, which clearly illustrate how prominent Polish businessmen in Lodz lived before the arrival of the Second World War. Just before the war actually started, the owners of Priest's Mill fled with all of their belongings, and today, the mill has been completely restored and refurbished, now appearing exactly as it once did some 70 years ago.
Open hours: Tuesday - 10:00 to 17:00, Wednesday and Friday - 12:00 to 17:00, Thursday - 12:00 to 19:00, Saturday and Sunday - 11:00 to 16:00
Admission: charge, concessions

A city of culture, there are many excellent theatres, such as the Teatr Wielik, which is the main venue in Lodz for ballet and entertainment, and also stages various events over the course of the year. The main theatres in the city are listed below:


Open hours: hour vary according to event and performance
Admission: charge for tickets

Address: Ulica Targowa 61, Lodz, Poland, PL
Tel: +48 42 634 5820
One of the main tourist attractions in Leon Schiller's National Higher School of Film, Television and Theatre is known in Lodz as the Panstwowa Wysza Szkola Filmowa Telewizyjna i Teatralna im L Schillera. This is a major academy for up-and-coming filmmakers, not only in the city, but also throughout Poland. Lodz is renowned for its film industry and this particular attraction was founded as long ago as 1948 and although it was always planned to relocate this film institution to the Polish capital of Warsaw, it has remained in Lodz and gained quite a status.
Open hours: daily
Admission: free