Although Bergen may be the second-biggest city in Norway after only the capital of Oslo, it tends to offer a considerably slower pace of life. Bergen has become an important centre for culture and is home to a leading Norwegian university, which was established in the 1940s and is now home to some 16,000 students.

The gateway to Norway's southernmost fjords, Bergen may be known for its rainy days, but this weather ensures that the city remains fresh, green and full of flowers. Greater Bergen comprises a series of outlying islands and peninsulas, while the city centre itself is relatively easy to walk around and it is here that you will find the world-famous Torget fish market.

The tourism industry in Bergen is helped further by its significant port, which is amongst the largest in Europe and features endless arriving and departing large cruise liners. For Bergen tourist information, visit the local tourist office (Reiselivslag) on the Vagsallmenningen, within the hall of the former Den Norske Bank. Also worth a look is the Fjord Expo information outlet, on the fifth floor of the city's popular Galleriet shopping centre. 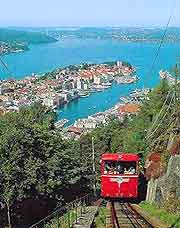 Spend time exploring the beautiful and rather historic Bryggen district, which has now become a prominent World Heritage Site. For perhaps the best views of Bergen, take a trip on the city's popular Floibanen funicular railway, climbing the steep slopes to reach the very top of Mount Floyen. Families will also enjoy spending time at the Bergen Aquarium (Akvariet), while for a touch of history, check out the 12th-century Bergenhus Fort and Gamlehaugen Castle, a residence of Norway's king. More information about Bergen Tourist Attractions and Landmarks.

Bergen boasts a huge array of museums and theatres, meaning that culture really does abound in this city. The Bergen Art Museum (Kunstmuseum) contains an exceptional collection of both Norwegian and international pieces, with contemporary artists exhibited here including the likes of JC Dahl, Munch and Picasso. To learn more information about the merchant sailors who once worked the Hansa dock, the Hanseatic Museum is a must, as are the archaeological Bryggens Museum and the fun-filled Vilvite Science Centre. More information about Bergen Museums and Art Galleries. 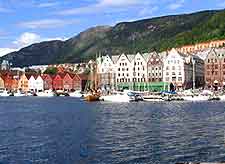 The numerous mountains surrounding Bergen provide tourists with a wealth of recreational activities, with hiking trails around Mount Rundemanen and even a cable car ride up Mount Ulriken. The winter months lend themselves to skiing, with a number of excellent ski slopes being located close by, in the neighbouring area of Kvamskogen. Alternatively, it is even possible to ski and ice skate in the summer, at Odda's spectacular icefields. Bergen is also close to Norheimsund and its amazing Steinsdalsfossen waterfalls, Scandinavia's smallest castle in Rosendal, and the inland town of Voss, where adventure sports include skydiving and white-water rafting. More information about Bergen Attractions Nearby. 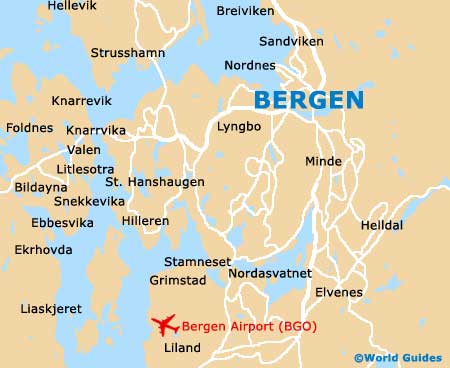