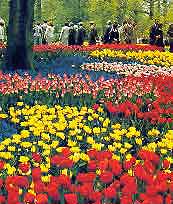 Amsterdam has a wide variety of parks within the city limits. The parks offer respite from the hustle and bustle of the city and range from small green areas planted with trees and flowers, to large parks with amusements picnic areas, sports facilities, water features, hiking trails and paths for cyclists.

Address: Plantage Middenlaan 2, Amsterdam
Tel: +31 (0)20 625 9021
Hortus Botanicus was established here originally as an herb garden for doctors and pharmacists over three hundred years ago. The East India Company's ships brought back exotic seeds and plants from other countries that they traded with. The gardens nowadays boast plants from almost every country, climate and environment, with climate-controlled glasshouses. There is also a medicinal herb garden that attracts students from all over the world and visitors can view one of the world's oldest potted plants.
Open hours: April to September, weekdays - 09:00 to 17:00, weekends - 11:00 to 17:00
November to March. weekdays - 09:00 to 16:00, weekends - 11:00 to 16:00
Admission: charge

Address: south-west of Leidseplein
This park is named after the poet and playwright Joost van den Von Dell and stretches from the Singelgracht to Amstelveenseweg, and is a great place for a picnic or a quiet stroll. Popular with both tourists and Amsterdammers, and in the summer there is a wide range of entertainment on offer, including an open-air theatre on Sunday afternoons, and besides official events there is no lack of jugglers, buskers and street performers to entertain and amuse.

Address: Nieuwe Kalfjeslaan, Amstelveen
el: +31 020 643 1414
Created in the 1930s, this vast park measures 900 hectares / 2000 acres. Specimen trees from many countries are now firmly established, as well as shrubs and trees native to The Netherlands. Providing a haven for many kinds of insects and small animals, the wood is also home to many species of birds, especially water birds. The wood is popular with Amsterdammers and there are many sporting facilities which can be enjoyed here, including cycling, jogging, walking, riding, fishing, swimming, rowing, and sailing. The Bosmuseum, situated in the park and open daily from 10:00 to 17:00, tells the story of how the wood was created. One area of the park which is very picturesque, especially in springtime, is the Kersenbloesempark (Cherry Blossom Park) which features over 400 flowering cherry trees signifying the cultural ties which exist between Japan and The Netherlands.
Admission: free

Address: Plantage Kerklaan 38-40, Amsterdam
The lush greenery is complemented by ponds, statues and winding pathways and the park is also home to the Artis Zoo which dates from 1838 and is one of the city's top attractions, housing over 6,000 animals.

Address: south of Albert Cuypstraat
This small English-style park was created at the end of the19th century, and was named after Samuel Sarphati, who was responsible for many social projects in the area.

Address: Linnaeusstraat, Amsterdam
Located next to the Tropenmuseum, this verdant English-style park dating back to the 1880s, borders the Amstel River.

Address: south of Amsterdam
Lying alongside the Amstel River, this park is a good place to enjoy a picnic or take a bike ride along its many cycling paths.

Address: Located in the Overtoomse district, Amsterdam
As one of Amsterdam's largest green areas, this park is a favourite spot for jogging and leisurely walks.

Many other small parks dotted around Amsterdam provide patches of greenery where the pleasant surroundings offer visitors a welcome break and the chance to review their itinerary and plan their next port of call. These parks include: