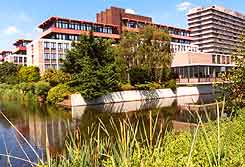 As the financial capital of The Netherlands, Amsterdam is a major money centre in Europe, and is home to several large banking groups and the offices of many foreign banks, and many of the working force is employed in the world of finance. However, the Amsterdam area is also an important centre for chemicals, petrochemicals, cars and trucks, engines, beer, paper and not least diamonds.

The Dutch people are a courteous people and a brief and friendly handshake is usually the customary greeting, and they normally expect you to address them by their titles and last names, unless they invite you to do otherwise. The Amsterdammers are a casual, comfortable nation who are not too particular about strict codes of etiquette.

The majority of Amsterdam restaurants open daily and breakfast is served in most hotels and eateries until 10:00 and consists of a continental-style meal. Lunch is usually between 12:00 and 14:00, with light snacks between 15:00 and 17:00. Dinner is served from around 17:00 to 20:00 and many restaurants close at 22:00. However, visitors wishing to dine after this time can easily find simple meals and snacks in night-time restaurants, pubs and bars. Amsterdammers also greatly enjoy snacks between meals and all over the city there are many reasonably priced snack bars or caféterias opening at around 12:00 until 01:00. 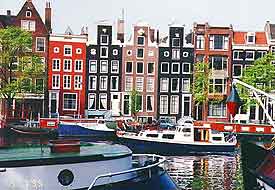 There are many opportunities to exchange currency and ATMs can be found outside most banks, Post Officers and at the airport, as well as at the Centraal Station. Post Offices are normally open during weekdays from 09:00 to 17:00 but some are open till later such as the Post Office at Centraal Station, which opens later and also on Saturdays.

Smart casual is recommended for all forms of social engagement in Amsterdam. Even the most upmarket restaurants in the city do not have a formal dress code. For business, however, both men and women will be expected to wear suits.